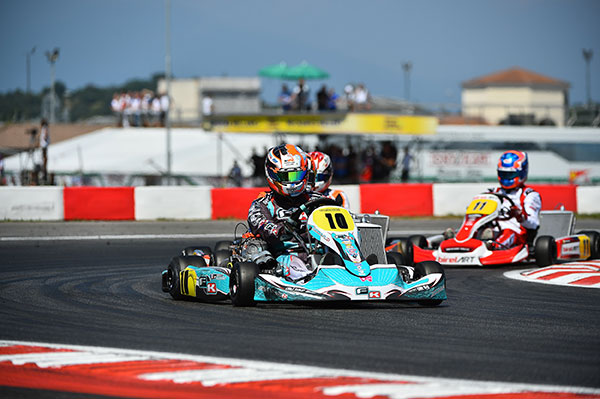 Celenta excels in speed and … bad luck. Iglesias and Pollini are the vice champions of Europe

CELENTA EXCELS IN SPEED AND … BAD LUCK. IGLESIAS AND POLLINI ARE THE VICE CHAMPIONS OF EUROPE

CELENTA EXCELS IN SPEED AND … BAD LUCK. IGLESIAS AND POLLINI ARE THE VICE CHAMPIONS OF EUROPE

At the second and final round of the FIA Karting European Championship for KZ and KZ2 classes, on the track in Lonato, the Praga Racing Team driver Francesco Celenta proved to be the best for most of the weekend. But the dream disappeared 7 laps from the end, while he was in second place. Iglesias confirmed his status at the top of the class and finished second in the championship. The same result, in KZ2, for an excellent Giacomo Pallini, with his Formula K chassis.

An important event is the one in mid-July at the South Garda Karting track in Lonato, scene of the second round of the FIA Karting European Championship for the KZ and KZ2 gear classes.
There are not very many KZ participants, but none of the names at the top of international karting are missing. To put everyone behind him, starting from the qualifiers, was Francesco Celenta (Praga Racing Team), who drove his motorized TM Racing Praga kart to cross the finish line in 45″624, which was to remain the best lap time of the weekend.
To demonstrate how much IPK material is performant, he continued in the heats, where Celenta achieved two first and second places, finishing at the top of the rankings. Things seemed to start well in the final as well, with 8 laps completed in the lead and another 10 laps in second place, with a minimum gap. Too bad that, at this point, bad luck changed the destiny of the race: an engine breakdown and the end of the race for him. However, this withdrawal, did not spoil a weekend in which the driver- Praga kart combination proved to be the fastest on the track.
Jeremy Iglesias was also fast (Formula K Racing Team), unimpressive in the qualifiers but with a clear recovery in the heats, finishing in 6th place in the rankings. In the end he was unlucky to finish in 14th place but it allowed him to rise to second place in the general rankings: KZ 2018European vice champion.

The talent of Giacomo Pollini (Formula K Racing Team) shone in KZ2, constantly fighting with the best. Sixth during the qualifiers, he won two heats and climbed on the podium in two others, finishing third in the ranking. He finished 5th In the final, enough to bring his Formula K kart to the second step of the podium of the 2018 FIA Karting European Championship for KZ2.
A good weekend for Pierre Loubere as well, who climbed on the podium of two heats and was 14th at the finish line. Thanks to these results, the Frenchmen finished the championship in the top ten, precisely in seventh place.
Natalia Balbo (NGM Motorsport) also qualified for the final, a sign of how much the Formula K chassis is performant on the Lonato track: with an entry list of 92 drivers, finishing in 27th place is a worthy result.

With the European gear classes events having come to an end, the next international karting event for the IPK teams will be in Essay on 5th August, for the last act of the OK and OKJ FIA Karting European Championship.