It has become a tradition that the last big international race of the karting season on the European continent is the WSK Final Cup. This year, the promoter chose a completely new race track – Adria International Raceway. Unflagging sunshine set a perfect stage to the all dry season final and underlined the cheerful mood in the paddock.

The Factory Praga Kart Racing Team at the very end of the season was represented by nine drivers. They competed in all categories. In the youngest category the factory team premiered the Australian driver Lachlan Hughes. Junior factory team pilot Rasmus Lindh in class KFJ was joined by Spanish champion Eliseo Martinez and the aspiring Alex Legnaro. The KF class was represented by experienced Marino Sato and the largest concentration of Praga drivers was in the strongest class KZ2 – Jonathan Thonon, Patrik Hajek, Max Di Bella and Thomas Salva.

The main objective for a trio of pilots: Salva, Di Bella and Legnaro was to collect valuable experience at a big international race competing with the best drivers and to get familiar not only with new tracks but especially with the work of the Praga Kart Racing team.

After adding up all the points from the Saturday races the most successful driver was Jonathan Thonon, who finished third in the KZ2 class. Excellent results came also from juniors Rasmus Lindh (11th) and Eliseo Martinez (14th).

Lachlan Hughes moved to the 16th place during the pre-final, and he was able to defend this position throughout the final. Rasmus Lindh in the KFJ class qualified high up, however an unfortunate time penalty deposed to him got him out of the final race. Eliseo Martinez started the final from 17th place. He gradually managed to get up to 7th place and he crossed the finish line in 8th place. His deployment resulted in the fastest time of all the drivers in the finals!

The KZ2 class final was introduced by a running presentation of Praga produced grown up race cars, the R1 Turbo. This close cockpit LMP inspired racers will form base of the freshly announced “R1 Endurance Cup”. The brand new series positioned as the stepping stone into the world of endurance racing brings the word “affordable” among prototype racers. A staged fight for position in warmed up the crowds and their applause granted leave marked the grid positioning for the go kart masters

Patrik Hajek started from the second row and Jonathan Thonon from third. Patrick squeezed to the second position very shortly after the start and he managed to retain it without problems throughout the race. Jonathan gradually worked his way up to fourth and at the very end after a series of unnerving battles Jonathan moved to the podium and saw the finish line in the third place.

Amongst the cheering crowds were many employees of the IPK Factory which is located nearby to Adria and where both Praga and OK1 chassis are being made. Double podium and successful performance of the Spanish master under the Praga colours were a symbolic rewards for their work. 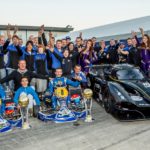 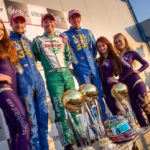 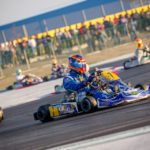 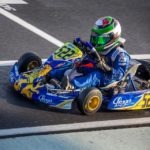 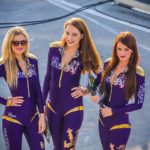 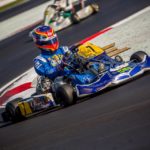 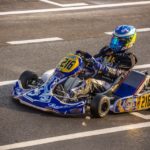