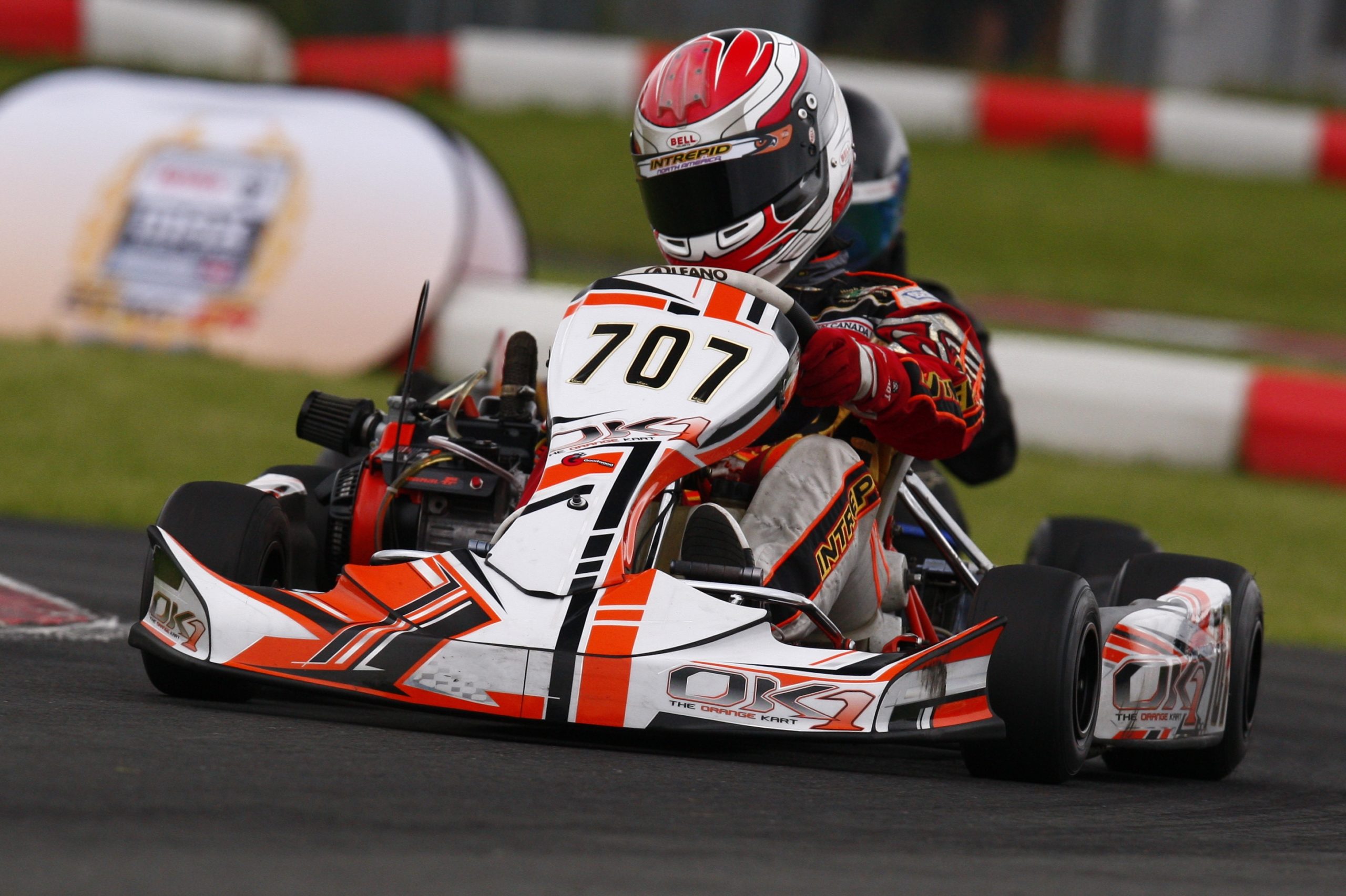 More Success for IPK North America at Round 2 of ECKC

8 July 2013, Canada — For the second straight event, IPK North America had a very strong showing in Eastern Canadian Karting Championship competition as it once again sent seven different drivers to the podium, this time in six different classes and in both two-cycle and four-cycle categories. IPK was on the Goodwood Kartways podium four times on Saturday, and five times on Sunday, and in each case one driver was leading the way: Zachary Claman DeMelo, after a double-win weekend in Rotax Senior.

“Coming back from a tough season in Europe, it meant a lot to get those wins,” Claman DeMelo said afterwards.  “Saturday we used the Prefinal as a test just to learn for the Final, and we knew we had the speed to win so I was not worried, I just wanted to get the lead and pull away. I knew the speed was there, and we did exactly that – we got the right gap and just held it.”

The Saturday win was the first in Senior for Claman DeMelo, and it didn’t take long for the three-time ECKC champion to get his second – it came just a day later after he qualified second, stayed on the front row heading to the Final and outgunned two-time DD2 World Champion Pier-Luc Ouellette in the main event.

“On Sunday I went in really early for the lead because I knew how much Pier-Luc would defend,” Claman DeMelo said of the second race. “Again, we just got enough of a gap and held it for the rest of the race. I gained much experience in Europe and it is definitely showing. I believe we are just as talented as every other driver in the class and now we’ve proved we can race with them.”

Of that there is no doubt, and the haul of 460 points for the weekend also moved Claman DeMelo into the overall points lead through four of six races. Francis Mondou and Elvis Stojko were also on the podium Saturday for IPK, both in DD2 Masters, as was Lauren Fortune in four-cycle Briggs & Stratton Senior. Starting eighth in a field of 25, she advanced to fourth in the Prefinal before going one spot better in the Final and reaching the podium.

“Being on the podium was a dream come true for me,” Fortune said afterwards. “I only started Briggs racing this year for fun, but was very competitive and decided to take it to another level. Starting eighth on Saturday I just wanted to stay in the race and finish, but the Final unfolded exactly how I wanted it to: clean racing all the way through. I had the speed to gain on the leader and second place at the end, but I was happy where I finished.”

Another team driver that would certainly agree on the viewpoint is Chaston Cullum, as he, too, had a strong weekend. After racing to eighth on Saturday in Briggs & Stratton Junior, he qualified on pole Sunday and was second in both the Prefinal and Final. It was the second of five IPK podiums on day two, following a third-place finish in Rotax DD2 by Marco Di Leo and leading into a third-place finish by Matthew Barry in Micro-Max, Claman DeMelo’s second win and a third-place finish by Francis Mondou in DD2 Masters.

Others just missed podium placement at Goodwood Kartways, as Xavier Harris finished fourth and fifth in Micro-Max, John Cariati was fifth and sixth in DD2 Masters, Christopher Proietto was fifth in Briggs Junior and Keenan Harris, in his first starts back since time away formula car racing, won the Prefinal on Sunday and finished fourth in the Final. Through two events of the Eastern Canadian championship, IPK North America has now had eleven different drivers generate seventeen podium finishes, and had two-cycle and four-cycle podium results from both Praga and OK1 chassis.