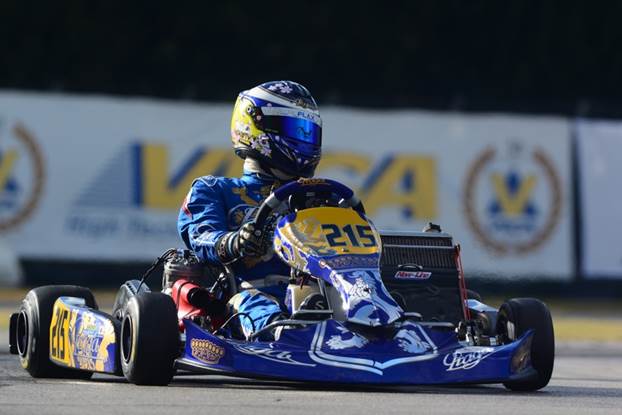 Factory team Praga Kart Racing started this year’s season by testing, which took place in the middle of February in Italian LaConca. This test focused on functioning of the technology, preparation of drivers and a cooperation of the whole team. There are several new members in the team, for example on a position of a technical manager there is the Champion of a World Gianluca Beggio.

For category KFJ the team nominated 2 young talented drivers that transferred from category Mini60. For both, it was a first big start in this category. Their main goal was progressive speeding up and going into the finals. Rasmus Lindh after an aggressive race did not make it from the pre-finals. Second driver Lukáš Podobský (KFJ) met his target and made it to the finals. Shortly after the start he had to retire from the race due to a collision caused by his rival. Both juniors had progressed during the weekend and their performance is very promising for upcoming races.
Category KF was the most occupied on Praga Kart Racing Teams side. On Praga chassis there were 3 drivers- Joel Johansson, Marino Sato and Karol Dabski. Dabski was the best during the weekend and he finished on position 13. After a time penalization due to an incident he dropped to position 17.

In the king class KZ Praga had Jonathan Thonon and Patrik Hájek. Both drivers belong to the high class and they were proving this during the whole weekend. In every race they were at the front. Jonathan Thonon started the finals from a 1st position. He dominated almost the whole finals until a moment when he had to retire right before the finish line due to technical problems.

Patrik Hájek started from the back row and during the race he managed to overtake 19 rivals and his ride was a pleasure to watch. Performance of both KZ drivers proved the functioning of the Praga chassis and IAME engines.

Praga Kart Racing Team will again be seen next weekend at the WSK Champions Cup in LaConca. The whole team believes we will have more luck there.