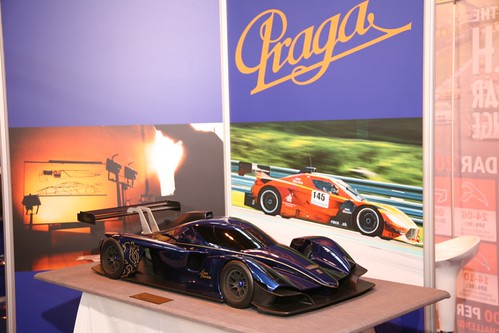 16 January 2012, Cambridgeshire, England — Following the Autosport International 2011 Show, Rollcentre are delighted to announce a new alliance with Praga Cars. Rollcentre will be representing Praga with the formation of a new company Praga Racing UK. The company will be based in the Rollcentre workshops in St Ives, Cambridgeshire. Rollcentre MD Martin Short says “I discovered Praga Racing at Spa in August 2011. I was hugely impressed about how such a little car was so near the front of the field in Dutch Supercar, especially at a big, tough circuit like Spa. I got into conversation with the MD Dusan Maly, and we realised we had a lot to offer each other. They (Praga) were an emerging car manufacturer from Slovakia with great technical skill and huge innovation, and impressively out of the box ideas. I found this really appealing. From my side, I have years of experience with small car manufacturers having represented TVR, Noble, Mosler to name but a few, from British GT to the Daytona 24hrs. It was obvious that there was a good fit between us, a relationship has been formed and now a Praga R4S sits in my workshop and we are about to start testing and assist with further development of the car. My brief is to run two Praga R4S in Britcar this year, and also involvement with Dutch Supercar. A huge bonus to this relationship is that Praga are now developing their own engines, a 532 bhp Suzuki Hyabusa based V8 weighing fully dressed on 89 kilos (which powers the R4S) and also a four cylinder engine 1500 cc producing 265 bhp. I can see a really good market for these engines for hill climb, rally cars and indeed more race cars. And finally the ambitions Praga are at this moment in Slovakia building the remarkable Praga R1 which has a futuristic and incredible look (pictured above left).

The last time I was in Slovakia I sat in the tub as it was being constructed and can report that it was very comfortable, and with the whole car weighing in at 550 kgs and with a potential 500 bhp behind the driver’s head this car fully represents where the Praga Racing Cars philosophy is. This is going to be the most amazing car to drive, with huge downforce, incredible power to weight ratio, and most importantly a fully enclosed cockpit. We’re expecting to see a car on track in the summer of 2012, so if you managed to read all the way to this point, you will guess I am very excited about the prospects with Praga. I must emphasise that we are still very active as we have been for the last 10 years with Mosler, supporting our customers and running and developing the cars. Praga is a welcome addition to our stable.