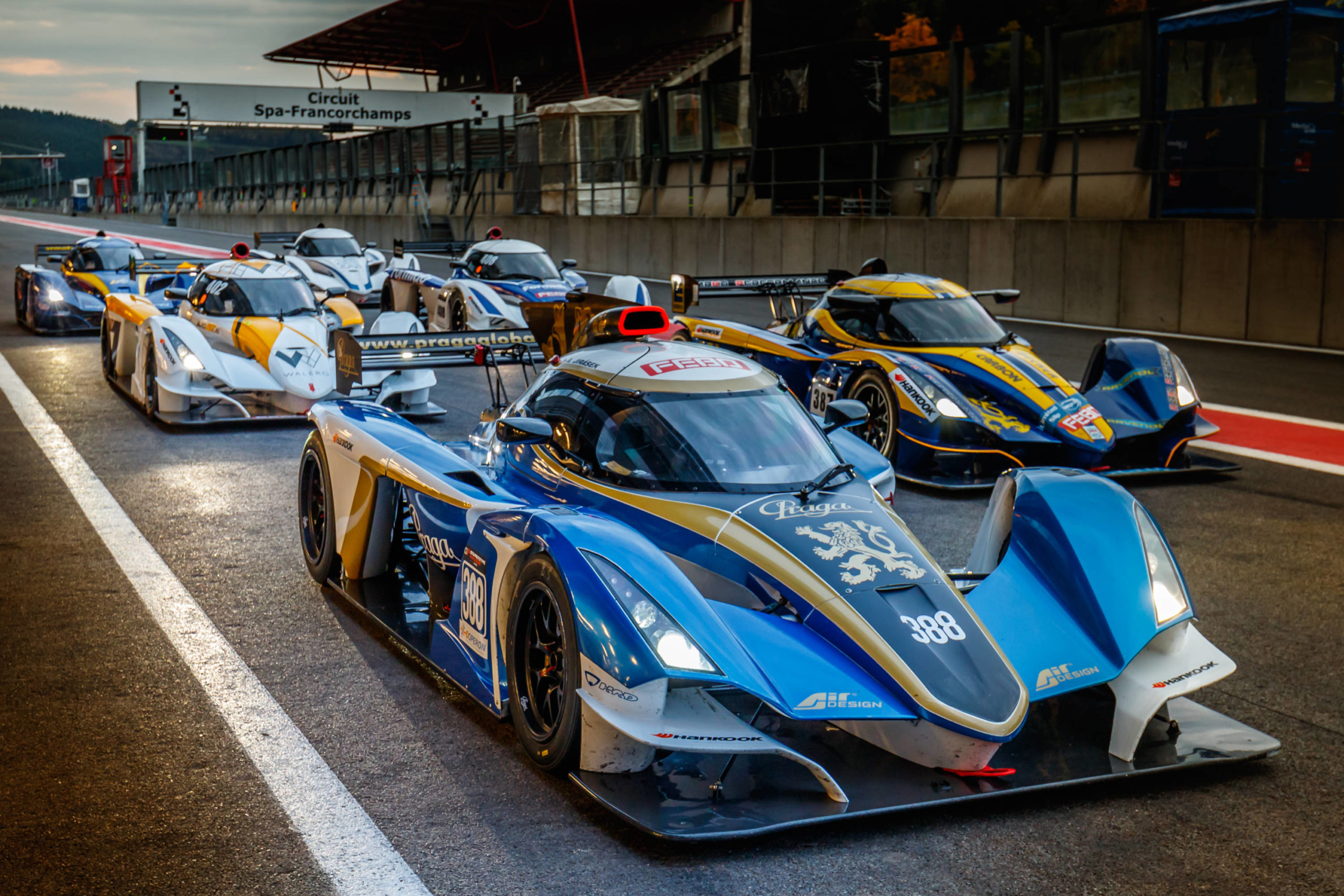 The Praga Cars factory team took part in the Dutch Supercar Challange championship at Spa Francorchamps the last weekend of August. Aleš Jirásek in the Praga R1T won both one-hour of races in the CN class and finished fifth and sixth over all. The weekend saw the attendance of five Praga R1 cars!

Praga took part in the penultimate race of the Dutch Supercar Challange series at the legendary Spa-Francorchamps circuit. In addition to the factory team, the race weekend, called the “Racing Festival Spa”, was also attended by three Praga customer teams – VR Motorsport, Edeka Aschoff Racing and Blueberry Racing. In total, three Turbo and two atmospheric Pragas were set for the start. In the 27 car field, LMP3 cars, CN prototypes and GT3 cars were also battling for the win.

Friday’s trainings proved that under more ideal circumstances the Praga would be able to be competitive even among the more powerful LMP3s. Saturday’s heavy rain fall meant everyone would be out of position Sundays race. Aleš Jirasek started for the factory team of Praga. He qualified 7th overall and second in the CN class. “Saturday was crazy due to heavy rain. Almost zero visibility on such a fast circuit was perhaps my biggest racing challenge in recent years. You drive 240km/h into a wall of water, just a few dozen meters in front of you. I’ve been asking myself a few times what am I doing here? Luckily, we have came home in one piece and beat a couple of LMP3 cars, so we have to be very happy” Jirasek said after finishing in sixth in the first race.

The Sunday race stated in much better conditions as the track had dried overnight. Aleš started on the third row. “After the start, it was pretty tight, but I was lucky enough to make the first few turns without a collision and even gained one position. I was able to keep pace with cars in front of me, and before I pit in I was doing great. I had a hard fight with an LMP3 and finally i finished in fifth position overall and first in class, which is the result we wanted, “said the factory driver of Praga after Sunday’s race.

The large attendance of Praga cars was welcomed by Jan Martínek, team manager. “It was great to see such a large Praga family. Especially on the legendary Spa-Francorchamps circuit. We even had a sixth car lined up that we were ready with, but unfortunately the customer canceled last minute. Extreme conditions on the Saturday and really beautiful weather on Sunday made the weekend a real experience for all the drivers involved. For us, it is important that at the end of the weekend all teams are satisfied with their race. Spa is a circuit with long straights, and the fact that one of the cars was able to climb between the LMP3 prototypes is a truly amazing result. In the second sector, which is a very technical section of the track, Aleš consistently showed the fastest times and beautifully demonstrated the potential of Praga R1.”