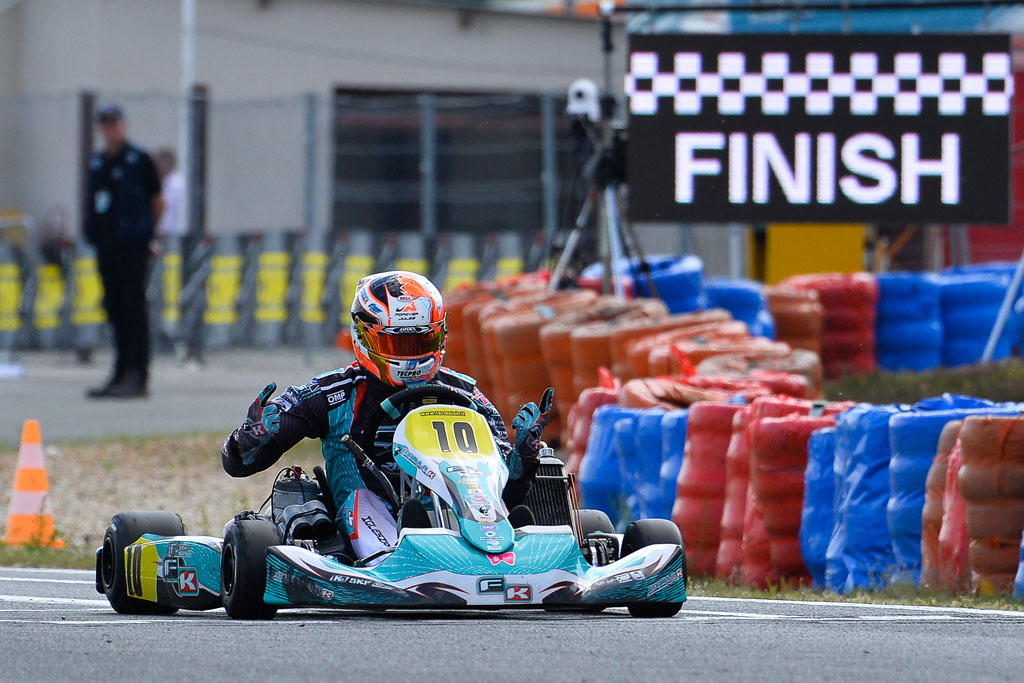 A positive first part of the season for IPK

A POSITIVE FIRST PART OF THE SEASON FOR IPK

A POSITIVE FIRST PART OF THE SEASON FOR IPK

The victory by Formula K Racing Team’s top driver, Jeremy Iglesias, in the European Championship at Salbris represented the exclamation mark on a first part of the season that saw the drivers and materials of the Praga and Formula K makes play a starring role in each class.

The victory by Formula K Racing Team’s top driver, Jeremy Iglesias, in the European Championship at Salbris represented the exclamation mark on a first part of the season that saw the drivers and materials of the Praga and Formula K makes play a starring role in each class.

The 2018 karting season still has a long way to go, but, with summer on the doorstep, you can start taking stock of how the initial months of the year have panned out. The overall situation is positive, thanks to the impressive results achieved by the drivers of the Formula K and Praga Racing Teams and, more in general, the excellent performances registered by the chassis manufactured by the IPK Group.

The most prestigious event so far was the FIA Karting European Championship which, as far as the KZ and KZ2 classes are concerned, disputed its first round at Salbris. Jeremy Iglesias won, taking his Formula K chassis to the front in a final that never saw him drop outside the leading places. Francesco Celenta also put in a good performance, demonstrating the reliability of the Praga chassis, climbing 9 places in the final and finishing 9th.

Good news also arrived from the non-shifter classes, where Sami Meguetounif (Formula K) stood out, in particular in the second round that took place at PF International, where he posted the 5th fastest time in qualifying and was 14th after the heats.

Also worthy of mention at the PF International was the exploit represented by 4th place by Alex Lloyd (Formula K), achieved thanks to an excellent final which saw him climb 9 places.

Regarding Meguetounif, the French driver also fared well in the Lonato Winter Cup, where he managed a splendid second place, and in the WSK Super Master Series, the main event in the first part of the international karting season: he recorded a double 6th place (in the pre-final and in the final) in the 4th round in Sarno.

In the Winter Cup, there were excellent performances in KZ2 by Francesco Celenta (Praga Racing Team), who finished 4th, and Jeremy Iglesias (Formula K), who finished 6th after climbing an impressive 11 places in the final.

Speaking of the WSK Master Series, it must be said that the Mini class drivers in the top teams Formula K Official Junior Team by ASD Serafini Racing and Praga Karts Official Junior Team by Muolo & Lotito were the most outstanding. A further sign that the material provided by IPK is competitive in every class. In Formula K, Ariel Elkin and Joel Bergstrom particularly distinguished themselves, with the latter making the podium in the pre-final in Round 4 and finishing 4th in the final. In total, in the last round of the series, which took place in Sarno, an impressive 6 IPK chassis made it to the final.

During the same weekend, Formula K Racing Team’s top driver in KZ2, Jeremy Iglesias, also impressed, finishing in 4th place in both the heats and the pre-final. It was a pity that bad luck forced him to abandon the decisive race early.

However, in the first round of the series, the MINI class saw Francesco Pulito drive his Praga chassis to victory in the pre-final and 5th place in the final. Pulito also managed a top ten finish in the WSK Champions Cup, the first major event of the season.

During the first championship weekend, in Siena, the clean sweep by Tommaso Chiappini (Formula K) stood out, finishing first in the chrono, heat, final 1 and final 2.

However, in the second round at Muro Leccese, IPK materials, used in the competition by the Formula K Italia – NGM Motorsport and Praga Karts Italia – ASD Bassano Corse Karting teams, starred in several classes. The KZ2 class was literally dominated by Giacomo Pollini, first after qualifying, heats, race 1, and 6th at the end of race 2, in which he posted the fastest lap (and in which he started from 8th place on the grid due to the inversion of the first 8 places with respect to the order of arrival in race 1).

In KZ3 Junior, Edoardo Tolfo was always among the leaders and went on to win race 2, even managing to post the fastest lap. Riccardo Nalon also managed the same result in KZ3 Under.

Lastly, Davide Vuano and Massimo Santin, two team-mates, duelled throughout the weekend in the Rotax Max, with Vuano in “cannibal” mode, not giving up first place for even an instant.

All the races disputed so far, both nationally and internationally, have not only show-cased the excellent performance of the Praga and Formula K chassis, but also demonstrated a positive trend, which can only bode well in terms of confidence and enthusiasm for the next decisive races in this season of top-level karting.