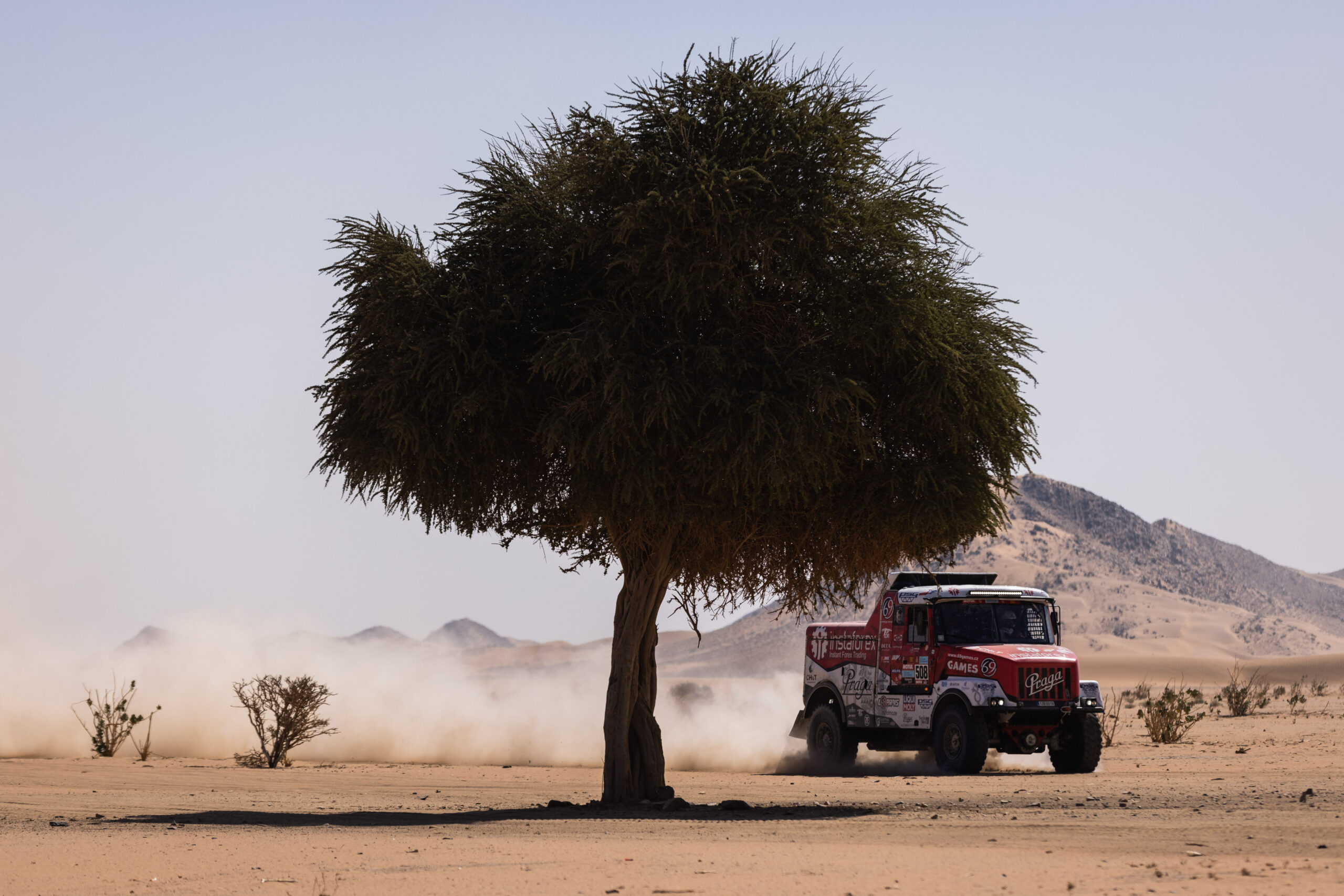 Dakar 2022: Instaforex Loprais Praga Team back on the top

“You can have bad days, but never give up fighting”. Those words were motivating the whole Instaforex Loprais Praga Team as they started stage eleven of the Dakar Rally after being forced to retire from the tenth stage due to steering failure. However, Aleš Loprais and his crew definitely do not want to just participate. They pushed hard and even had good fun, finishing stage eleven only 28 minutes behind the fastest driver of the day, but in eighteenth position in the overall standings. 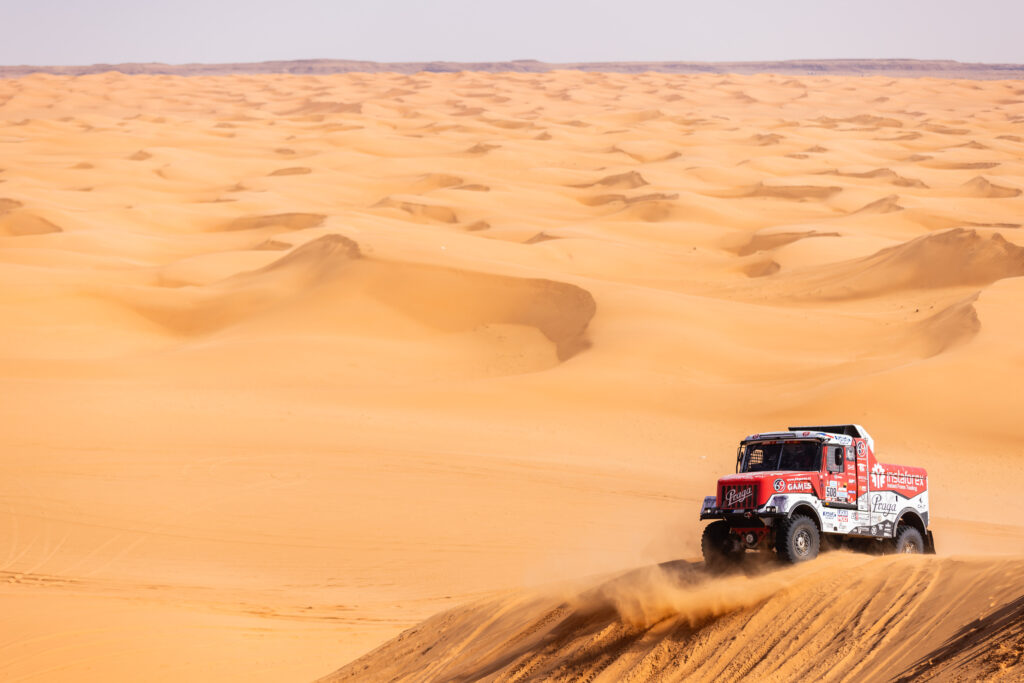 On Wednesday, January 12, the 2022 Dakar Rally started stage ten from Wadi Ad Dawasir to Bisha, with Aleš Loprais, Jaroslav Valtr jr. and Petr Pokora holding fourth place in the trucks overall standings. However, their valiant battle against a factory Kamaz team ended prematurely after a rough landing from one smaller dune, just five kilometres after the start of the special stage.

“We had lost our luck a bit today, as a power steering cylinder didn’t survive a jump from one of the smaller dunes. We don’t have this part with us, and the Lady can’t turn in the desert without it. It’s a bit weird, it was a pretty simple segment of the stage, yet a couple of us ended our journey here. There was a Can-Am that had rolled over right next to us, and Gert Huzink destroyed the chassis of his truck,” describes Aleš Loprais.

The Instaforex Loprais Praga Team support truck with mechanics went on to help Loprais and his crew. However, it was clear that the Praga #508 truck would not be able to finish the tenth stage. As the rules state, the crew could still continue in the competition after fixing the truck. However, the price is high as they would be given a massive time penalty, ruling out any hopes for a decent result in the overall classification. 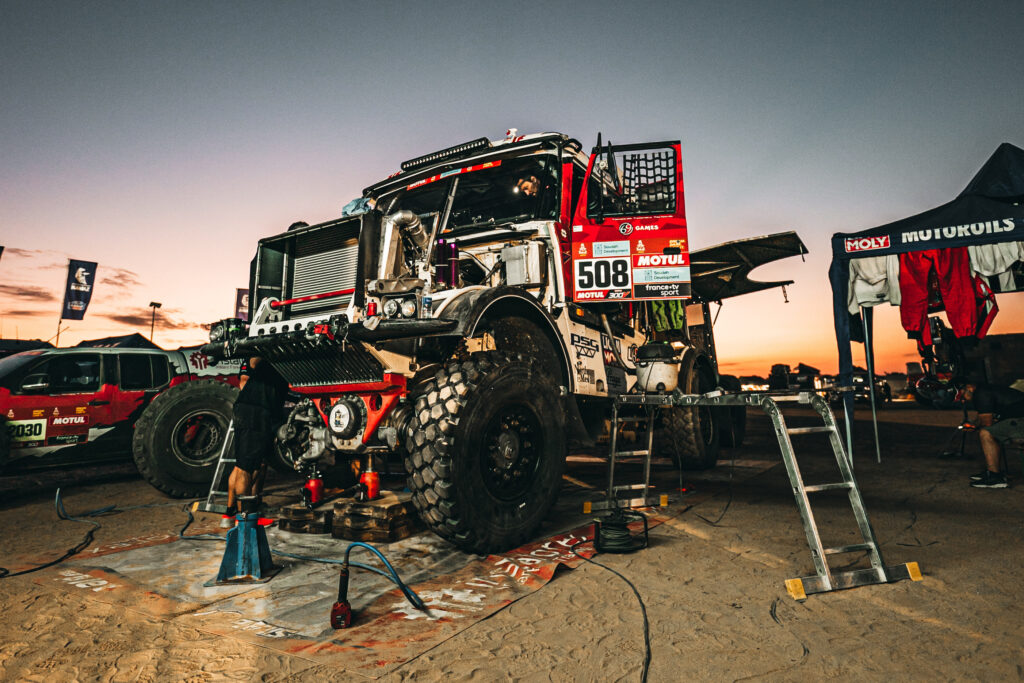 “Right now, I’m still not sure whether we can fix it and continue. Our goal was to be on the podium, even though it’s getting harder and harder to succeed against the factory Kamaz trucks. However, we put on a valiant effort. We believed in a podium, and we were close. We were looking forward to tomorrow’s stage that is supposed to be very exciting, but it didn’t work out. That’s Dakar. I really wanted to do it, especially for Karel, who was looking over us all the way through, and I believe that was the case even now. Despite we didn’t make it, nothing serious has happened and we’re all unhurt,” he adds, showing that his uncle and a six-time Dakar winner Karel Loprais, who passed away just before this year’s Dakar event, is still on his mind.

“Once again, I’d like to thank everyone for their support, especially our families, fans, and partners, who are with us in this big game. We really appreciate it, and we hope that you will stay with us even in the future,” concludes Aleš Loprais. 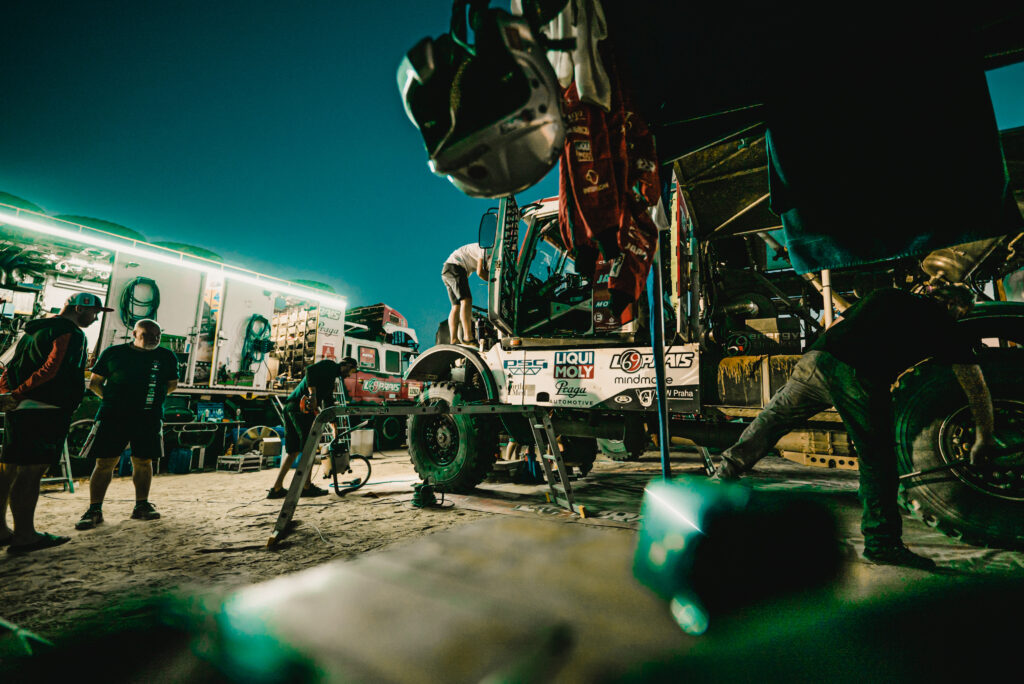 On Thursday, January 13, after many hours that Aleš Loprais, Jaroslav Valtr jr. and Petr Pokora had spent with their mechanics trying to fix the Praga V4S DKR, the team decided to continue despite having no hopes of getting a solid result in the overall standings.

“I’m exhausted after sleeping for only one hour today, but I’m also really happy. Big thanks to Aleš and the ‘council of elders’ who have decided to continue, even though we can’t achieve a good result anymore. I think that they’ve done it not just for me and Jaroslav, but also for Karel, who is constantly on our minds. And also, for the guys who worked hard on the truck for the whole year,” says mechanic Petr Pokora, whose team of mechanics are responsible for preparing the truck during the year.

“Every time you don’t finish the Dakar, it’s a huge disappointment for everyone. The whole team is an excellent group of people. Big thanks to all the guys for their hard work last night. I really appreciate that,” says the excited Czech mechanic from Plzeň, who is also known as Butul. 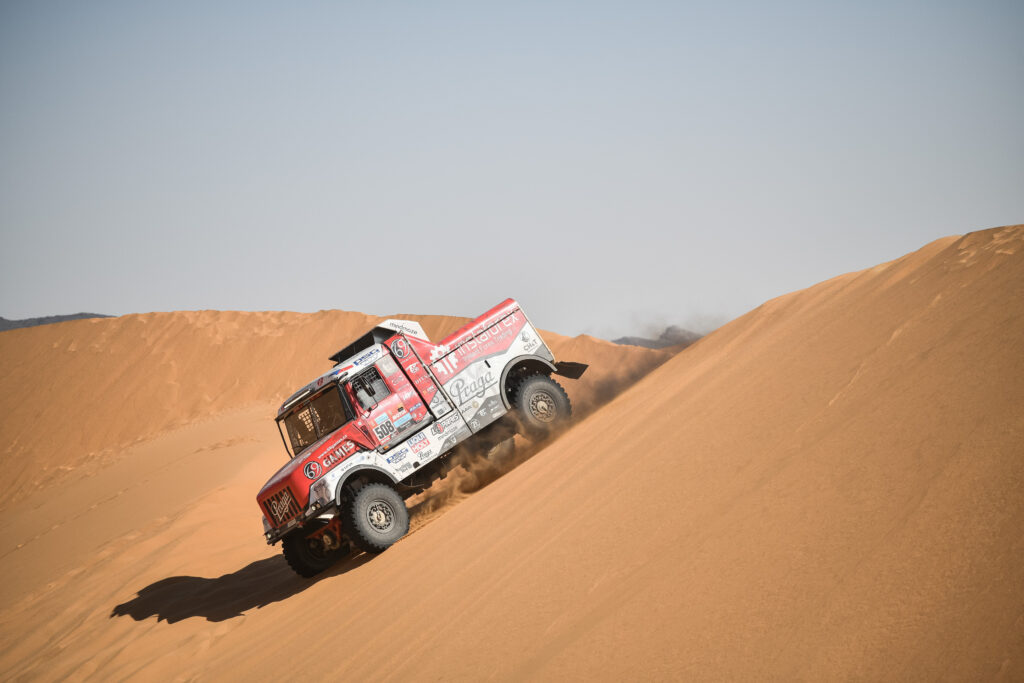 Thanks to the team’s maximum effort, the Praga #508 could continue in its journey with the penultimate stage of the event. The organisers were promising one of the most challenging but also most beautiful stages of the year. And they were right. On this special stage (346 kilometres), the competitors had to face difficult segments with camel grass, demanding navigation, rocky parts, and difficult high and soft dunes.

“First of all, huge thanks to the guys for finishing everything last night, making sure that the Lady could continue today. They did a fantastic job,” adds Aleš Loprais more praise for the team.

“Of course, after yesterday, there’s not much to do with the results, so we just wanted to enjoy ourselves. But I was really enjoying it sometimes, especially the dunes. I’m surprised that we were able to pass so many competitors, and to set such time after starting in lots of dust. All that even though we had a puncture, I took some time to pick up flowers from a cactus there for the girls at home. That would be funny in the final. But I’m grateful,” finishes Aleš Loprais, who set seventh fastest time in a loop around Bisha in the trucks category. He was only 28 minutes behind the fastest driver of the day, Eduard Nikolaev in Kamaz. In the overall standings, Loprais is now in eighteenth position, following a 24-hour penalty for not finishing the previous stage. 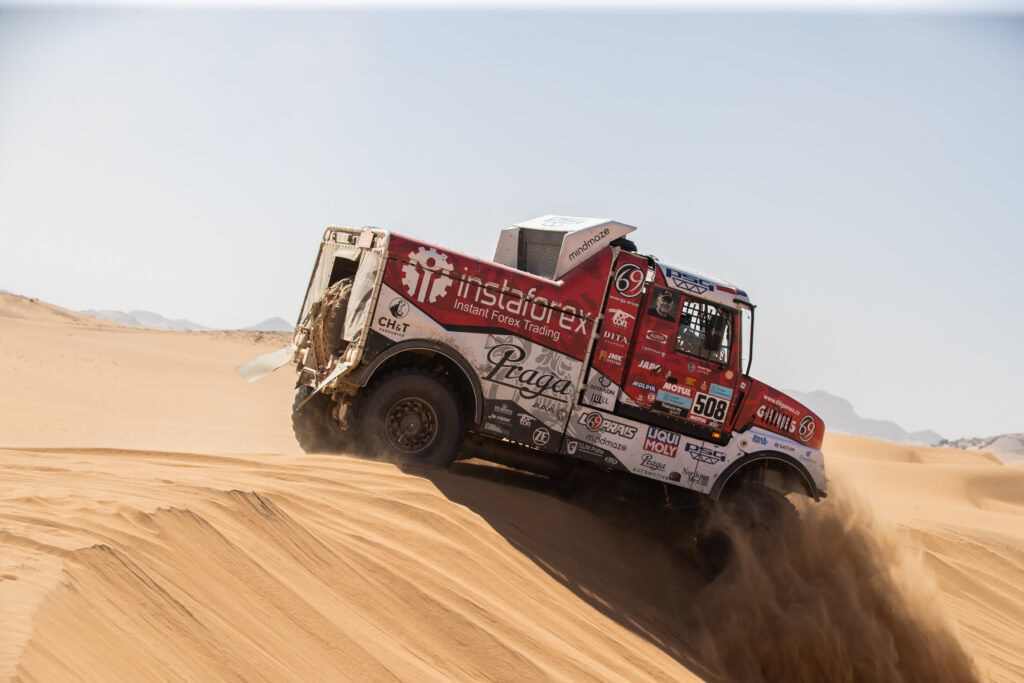 The 44th edition of the Dakar Rally ends on Friday, January 14, with a twelfth stage that is going to be 680 kilometres long. The competitors will go from Bisha to Jeddah, as they face the final special stage (164 kilometres) of the event. It should offer mostly soil terrain, but there is still going to be some sand and even tricky rocky sections.