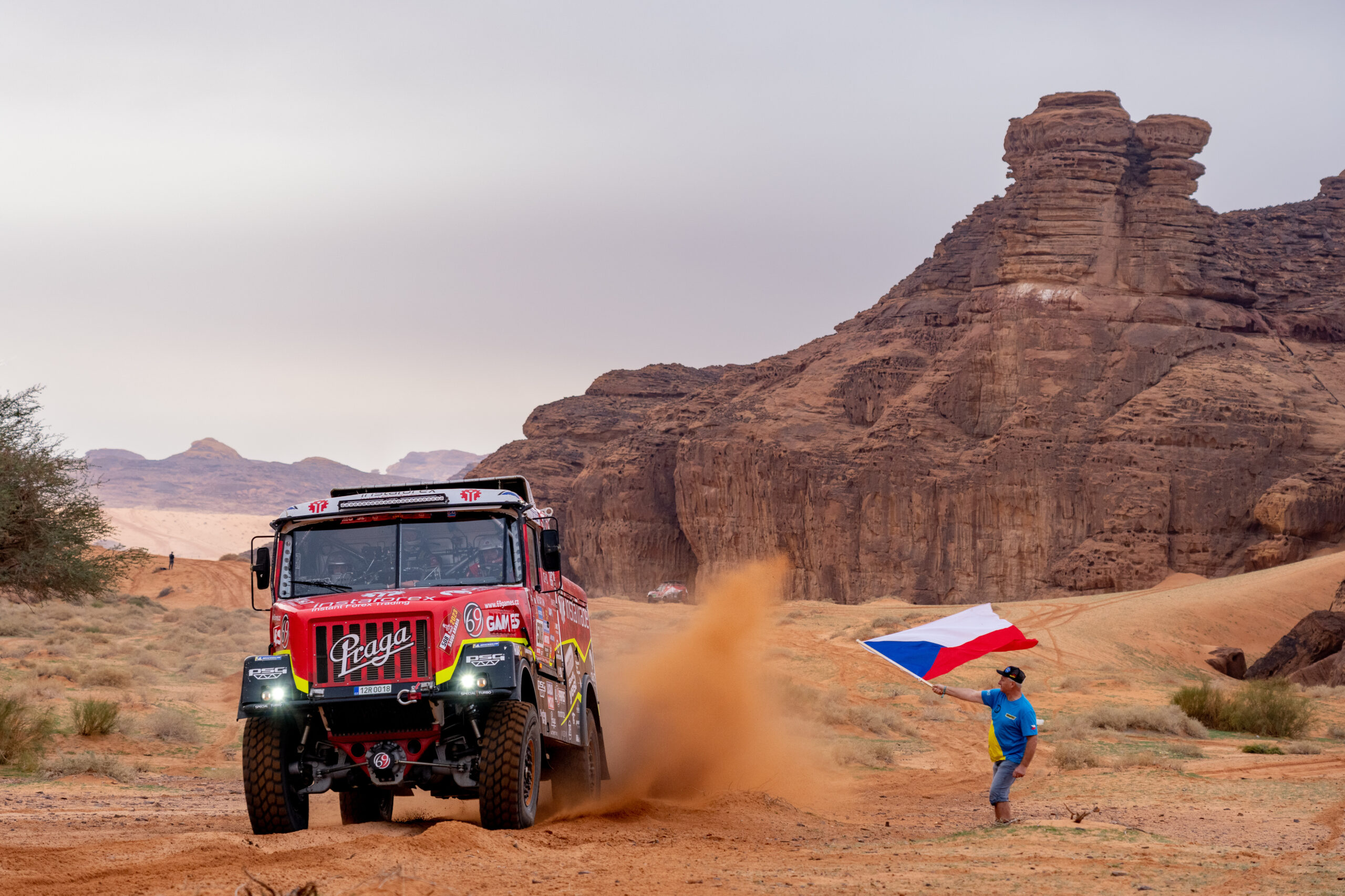 After a challenging Stage 3 where extreme weather, multiple punctures and a penalty for missing a waypoint lost Aleš Loprais and his team valuable time, the Praga team is now back in the lead of the Trucks category at the conclusion of Stage 4. The tight battle in the overall classification continues. 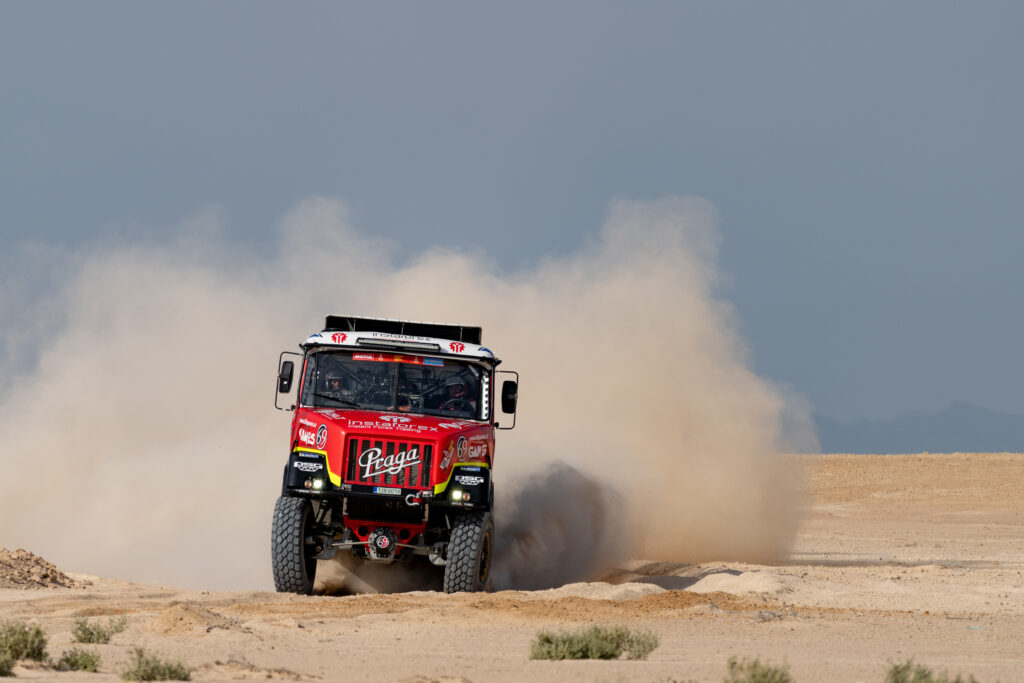 On Tuesday, January 3, Aleš Loprais, Jaroslav Valtr jr. and Petr Pokora set out with their Praga V4S DKR truck on the route from Al-Ula to Ha’il with 447 kilometers ahead of them. After a great start, managing to stay close to the fastest time despite wet sand, their luck was to change. A slow puncture on the left rear tyre lost them valuable minutes, shortly followed by a second puncture, this time on the right rear tyre. After being forced to stop for a tyre change, just a few kilometres later, the right rear tyre suffered another puncture.

As the wet weather continued, the Praga team happened across two buggies stranded in the swelling river basin. The two trucks leading the stage abandoned their race to come to the aid of the buggies and their drivers, who were in danger of being swept away in the wild conditions. 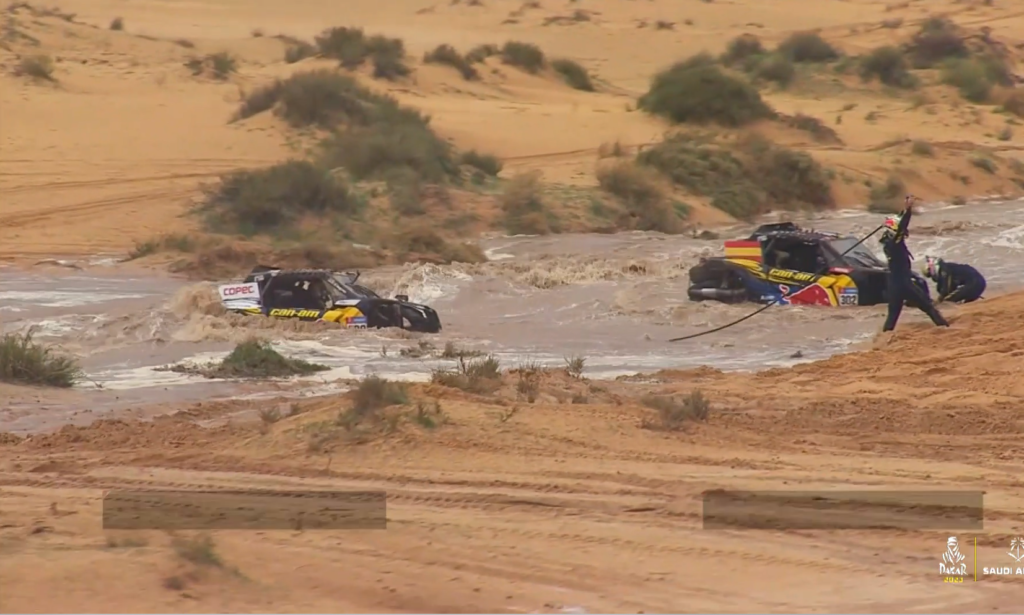 With the strong wind and rain persisting, the stage was stopped at a control point after km 377. The Praga #508 arrived there in fifth place, however, the crew missed one of the waypoints, incurring a 15-minute penalty, moving them down to tenth position in the stage classification, yet second in the overall standings, just 6 minutes behind new leader Jaroslav Valtr sr.

On January 4, the Dakar Rally 2023 continued with a 574-kilometre-long loop stage around Ha’il. This time, crews faced another long and rough special stage of over 400 kilometres of dunes, wet sand and zigzagging in a passage with camel grass.

Starting from behind due to the time penalty, Aleš Loprais and his crew made a successful start, passing trucks and buggies, with a good run overall. 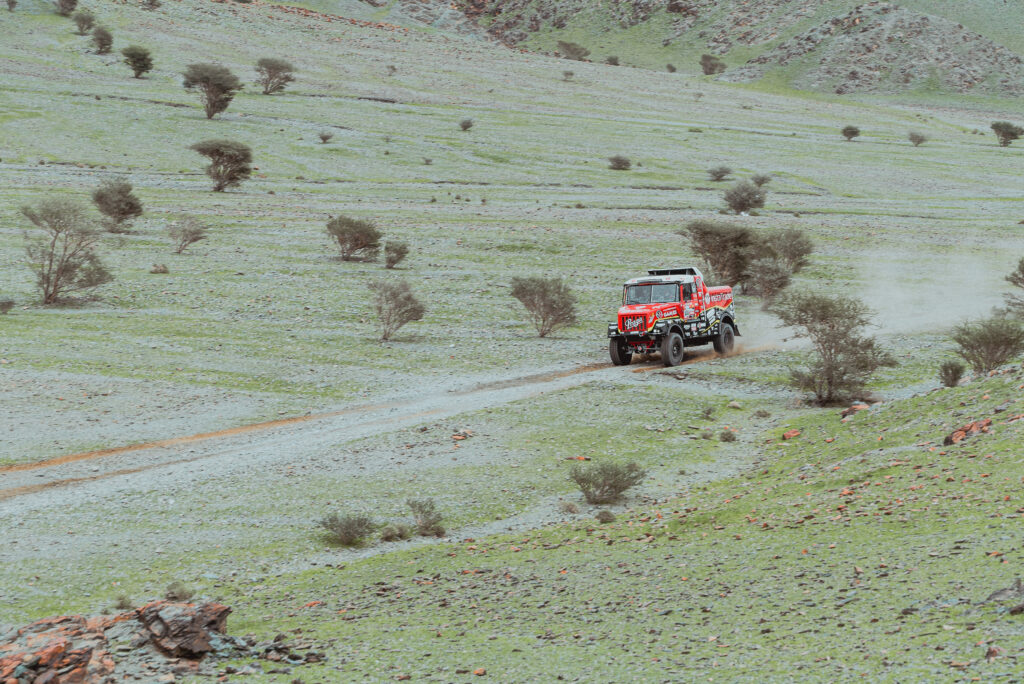 “The G-force was huge sometimes as we kept going up and down. At times, we were more in the air than on the ground, but the first half went perfectly well for us,” praised Aleš Loprais.

Travelling at speeds of 140 kph to gain places, the Praga truck suffered a puncture caused by unavoidably landing on a rock following a jump. The crew then faced even more complications, this time with navigation equipment, which was fixed without necessitating a stop.

Overall, Aleš Loprais and his crew gained crucial minutes on their competitors and finished the stage in third place, and after a one-day break, they returned to the overall lead. They now enjoy a gap of 27 minutes to Martin van den Brink from the Netherlands, who has jumped two competitors and is currently in second position in the Trucks category.

While the Instaforex Loprais Team mechanics face another night shift, the Dakar Rally 2023 has prepared another loop stage, this time 649 kilometres long, with a 374-kilometre special stage, which will take place in dunes located north of Ha’il.