At the Circuit Paul Ricard, IPKarting chassis fitted with IAME engines accompany 20 talented girls competing for a place in the Ferrari Driver Academy.

Five days of karting and workshops focussing on mental and physical preparation, during which to try to impress a jury of experts and get a place among the eight girls who will have the opportunity to try their hand at driving a Formula 4 car under the tutelage of Winfield Racing School. That’s the programme of FIA Girls on Track – Rising Stars, a selection that is underway at the Circuit Paul Ricard involving 20 of the most talented girls from 5 continents chosen by their respective National Sports Authorities.

An all-round training camp, a large chunk of which consists of on-track activities aboard IAME-motorised Praga Dragon EVO 2 chassis featuring the Junior class set-up. 20 identical vehicles in which the girls, thanks in part to continuous support provided by Praga staff at the track, who looked after the participants from the seat assembly phase onwards, were able to show off their skills in a number of hot-laps, qualifying tests and race simulations.

With the help of training from the staff of the prestigious Winfield Racing School and under the gaze of the President of the Fédération Internationale de l’Automobile (FIA) Jean Todt and the President of the Women in Motorsport Commission Michèle Mouton, the participants were able to hone their skills and declared their enthusiasm for the performance and reliability of the equipment provided by Praga Kart and IAME.

The programme includes two days of shoot-outs, followed by a second phase called Training Camp 1, which will involve the best 12 girls and where the simulations on board the Praga Kart chassis will become increasingly intense, with in-depth performance analyses and workshops conducted by 321 Perform. Finally, the best eight will enter Training Camp 2, starting on 2 November once again at the Circuit Paul Ricard, where they will familiarise with the Formula 4 cars and, at the end of which, one of them will have the opportunity to win a season in Formula 4 at the prestigious Ferrari Driver Academy.

A unique path, designed to unearth the top talents and support them during a critical phase of their development, of which Praga Kart is proud to be a part. 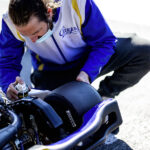