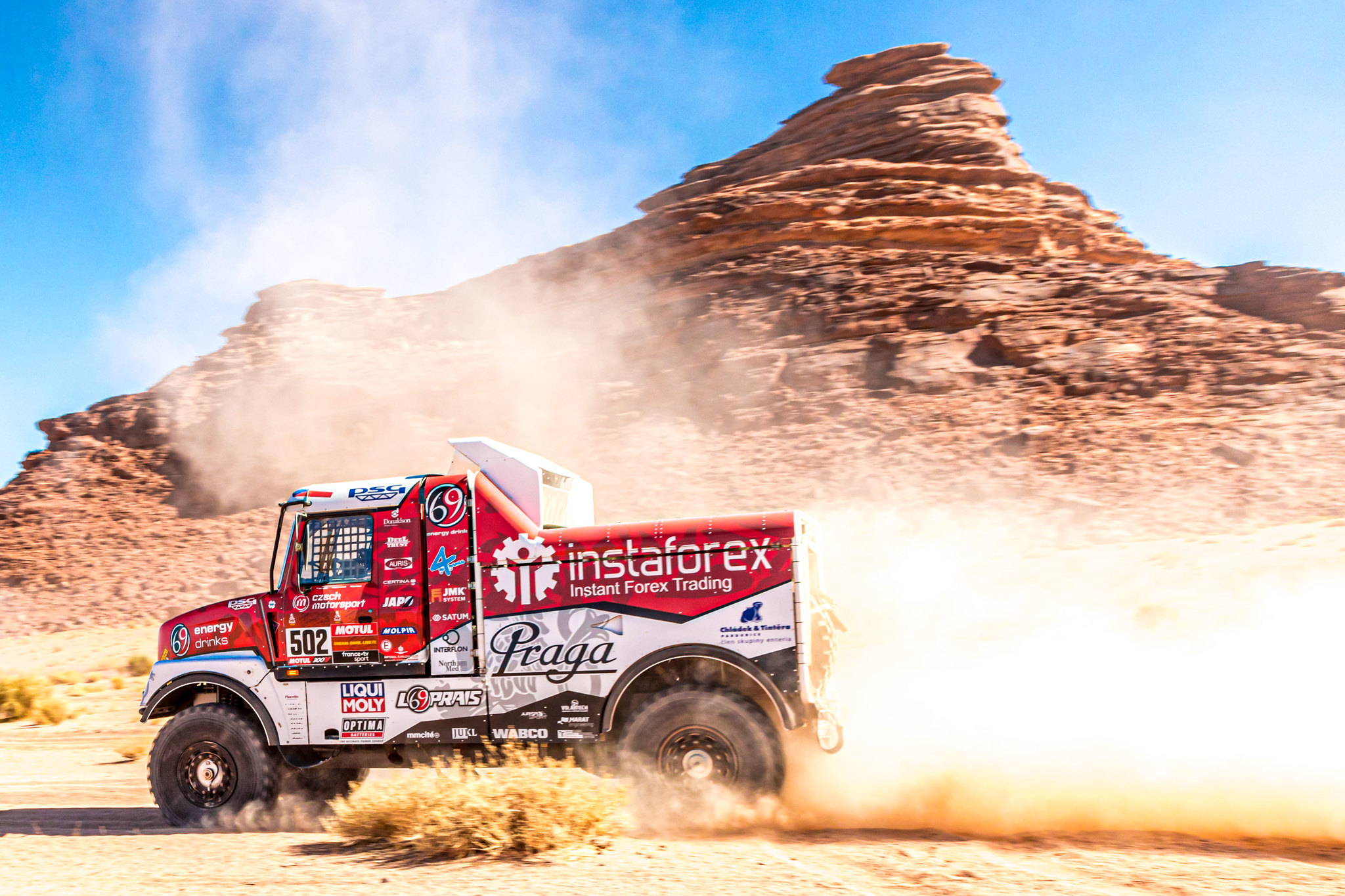 08.1.2020 Dakar
Aleš Loprais, Khalid Alkendi and Petr Pokora have improved by one place after the third day of Dakar Rally 2020. The Instaforex Loprais Team with Praga V4S DKR now holds the sixth place in the standings, following a loop stage that started and finished in Neom. They are now less than five minutes behind last year’s winner Eduard Nikolaev, who is currently in fifth.
Tuesday offered a timed stage of 404 kilometres, the longest one of this year’s Dakar Rally so far. The vehicles had to reach an altitude of 1,400 metres while facing fast dusty sections and sand.
Apart from the racing itself, Aleš Loprais and his team had to deal with a turbocharger regulation, that has been causing issues for the crew and the mechanics since yesterday.
“The first three kilometres were great, but then there was an issue with the turbocharger sensor again. We still haven’t figured it out and it cost a lot of time today. Especially in the first part of the stage. When we stopped to restart the unit, several cars and also two trucks got ahead of us. Then we had a screen of dust ahead of us, but we couldn’t get ahead of them for more than half of the race. It was frustrating. And we kept losing power until the finish line,” said Aleš Loprais.
“We’ve managed to gain a lot in the sand, where I had fun in some places. That was a nice satisfaction,” said the Czech driver who feels like home in dunes and sand.
The routes in Saudi Arabia are extremely difficult for the tyres. Many racing crews had to change their tyres over the first three days already. Some of them even more than once. And today it was the case for Loprais, Alkendi and Pokora as well.
“We had two slow punctures. We changed the first tyre in the neutralised zone, but with the second one, we drove to the end. We just didn’t want to let go what we’ve gained in the sand,” explained Loprais.
Once again, the stage around Neom was very difficult for navigation. In some categories, even the biggest stars got lost. And even Khalid Alkendi had to look for the route for a while.
“We’ve got lost a bit, but it was much better than yesterday. We’ve swapped our position with Martin Macík twice and I really appreciate his fair-play. He let us go because he was slowing us down. I think he had some technical issues as well. Then we missed one junction and he got ahead of us once again. The whole stage was very difficult, but it went very quickly for me,” said the onboard mechanic Petr Pokora.
The Dakar Rally 2020 continues on Wednesday, January 8, with its fourth stage. The route from Neom to Al Ula has 676 kilometres. The special stage is a little bit longer again with 453 kilometres. Most of the stage will consist of soil terrain and the organisers are promising more difficulties in navigation.
Follow Instaforex Loprais Team at 2020 Dakar Rally:
https://www.facebook.com/InstaForexLoprais/
https://www.instagram.com/ales_loprais/
https://www.youtube.com/LopraisTatraTeam
https://www.flickr.com/photos/loprais-team/
08.1.2020 Dakar