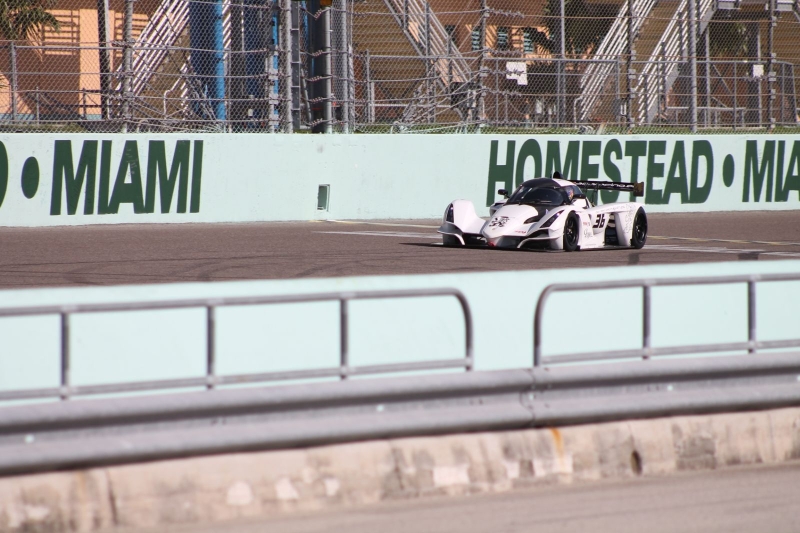 Praga Cars took part in late season endurance race FARA Miami 500 on Homestead track, Florida. Weekend of November 30th and December 1st 2013 will stay graven in Praga R1 Turbo history forever. It is the first victory for new, more powerful version of beautiful and efficient Praga R1 race car. We believe this is just the beginning and are confident, there are more wins to come in near future…

Some say there were almost 20 000 spectators at the race that day. And what a day that was. For Praga crew definitely one to remember. But let us start at the beginning of the weekend. After hard in-race testing in Holland and Portugal with some minor modifications we believed turbocharged version of Praga R1 is ready to take proper challenge. With not that many choices at the very end of the motorsport season we decided to try short endurance race with R1 902. Race number 36 we got for competition had two pilots to race. Our test and development driver Danny van Dongen and native Josh Hurley.

As always, mechanics did their very best to prepare the car for though Saturday’s qualification. Besides regular checking and settings of the engine, suspension, aerodynamics we changed all the liquids, hewland transmission’s oil pump and opted for new brake pads from producer Cobalt.

Praga R1T won the qualification with Danny van Dongen at the wheel with just two hot laps. Qualification ended up very soon after a minor crash in the first left-hand corner past the start/finish line. Danny believed the car can take more and so he pushed it to it’s very limits. Lateral force took the car to the kerb pretty hard, which resulted in breaking of rear right wheel’s push rod… Nevertheless with best time 01:18.678 Praga R1T managed to be almost 2 seconds faster than second best, regardless the class. 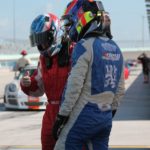 Sunday: A day to remember

Josh Hurley took Praga R1T for a spin in warm-up session very first time that weekend. He tried n/a Praga R1 first time just the day before during academy laps. Josh was very pleased with the car and it’s setup. Turbo version gave him everything he had wanted from R1 the day before. Mechanics decided to change front right wheel’s camber for long and fast left handers. Both Praga R1’s and the pilots got some attention from crowds during lunch break. The weather was race-perfect, sunny, 28°C. Danny was the one starting the race from pole position he gained.

The whole team knew Praga R1T is faster than the rest of the field. But it was not going to be this easy and obvious to win start-finish style. The main problem was much smaller fuel tank than all the competition. The strategy was to gain big enough gap to be able do refill and maintain first position. Praga Team also does not yet posses fast fueling system, which is another drawback for endurance racing. No only did we have to do more pitstops, those were also a bit longer than the rest. That was the theory…

Distance between our car and the second was noticalbe already after first lap. Outhright speed of R1T made team members whispering in very beginning of the race: ” They are going to ban this car from other races…”

But nothing comes easy and clean of course. In first hour only safety car went out three times. First and second time because of crashes, third time because of heavy rain. That made a whole lot of trouble to all those dry slicks cars. Visibility became also pretty poor. First pitstop pushed Danny from 1st down to 9th position. Mainly because of slower than expected refueling and wheel-change. The loss to first driver was already one lap. The next hour saw a crazy tempo in wet conditions, in which Praga R1T made up some unbelievable 10 – 12 seconds each lap to second fastest car on track. After just 20 minutes car number 36 was back at the top of the field. Before the driver change had some 2,5 laps gap to second place.

Two hours from the start of the race became Josh’s turn. Pretty much each team had a dilemma whether to change for slicks or not. Praga’s team manager decided to keep wet tires. Unfortunately it did not start raining again, which overheated wet slicks way too much. This meant loss of grip and worse times per lap. Even though safety-car came in 4th time Praga team had one more big communication problem. Josh’s intercom did not comply with ours. To make things even worse, start-finish line in Homestead has no pitwal like we are used to. This made old school gesture communication team-to-driver impossible too. We had to wait until Josh decided to come in on his own. That meant another unexpected loss of time. We got back on track in second position, behind Porsche 911 GT2 with start number 99. To fight for win meant to push much harder. Josh Hurley did a very good job, shortening the gap to some 13 seconds. Just as heavens gift for the firs time for that day safety-car came in for the 5th time during 4 hours race. Just about 11 minutes before the end. After the green flag it was quite easy to overtake Porsche with Patrick Otto and win. First two cars managed to do 140 laps in 4 hours race. Difference between 1st and 2nd place was just some 33 seconds. Besides nerve-wracking race Praga R1T did not have any failure. After 4th hard testing of the turbo version, second time in full race, this makes it race and customer ready. In case you are interested in car more specifically, write us an email to:  info@pragaracing.eu