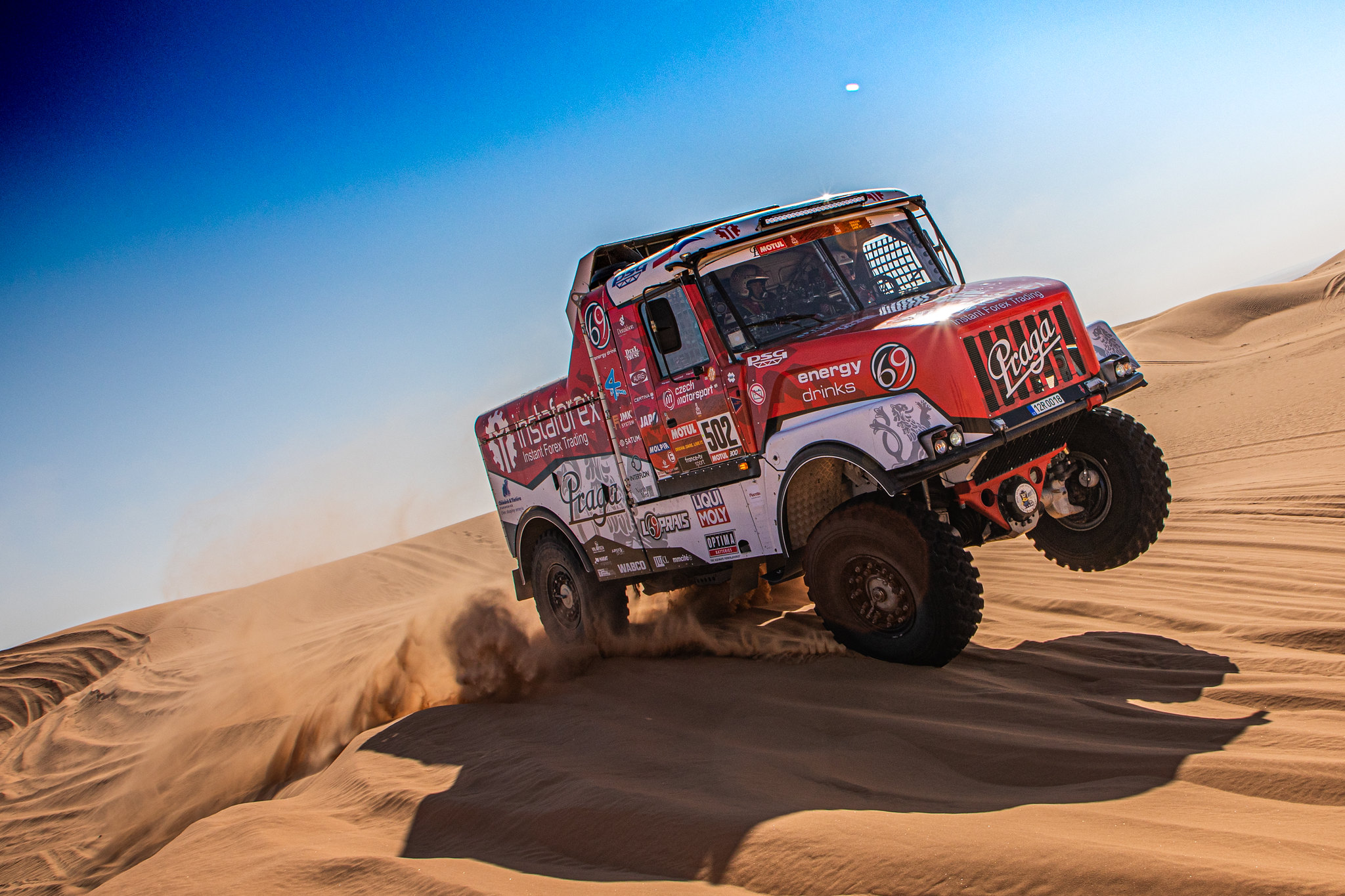 19.1.2020 Dakar
On Friday, January 17, Aleš Loprais, Khalid Alkendi and Petr Pokora took the third place in the Qiddiya Grand Prix, the final stage of Dakar Rally 2020. In the end, the Instaforex Loprais Team with a brand-new Praga V4S DKR finishes in the seventh place overall in a Truck category.
The final short special stage, that went very close to the final destination, was just the icing on the cake of the first-ever Dakar Rally in Saudi Arabia. While the final times did not count towards the overall standings, it was all about a show and prestige in front of the live crowd. The new Praga #502 managed to do this 13-kilometre long stage in 10 minutes and 3 seconds, taking the third place, only behind two Kamaz trucks.
However, even before that, the crews had to tackle a full final stage leading from Haradh to Qiddiya. There, Loprais and his crew confirmed the seventh overall position in the Truck category by setting the sixth fastest time.
This year’s Dakar was the first one, that the Instaforex Loprais Team had entered with its own brand-new vehicle. The whole competition had over 7,800 kilometres, including more than 5,000 kilometres of special stages. It was the ultimate test of engineering and it showed, where the development should lead next.
“I was leaving for Dakar worried that the truck is going to suffer from initial problems, as it’s a brand-new vehicle. But that didn’t happen. We only lost a part of our exhaust pipe, which cost us just like five minutes, so I’m ok with it. However, I was surprised to see the issues with the turbocharger, which surely had something to do with the fact, that we didn’t have enough time to test everything in similar conditions to Dakar. There are multiple factors involved like altitude, temperature, humidity, cabin loadout and most importantly an automatic gearbox. Now we know how make our great Praga truck even better,” said the onboard mechanic Petr Pokora.
The Praga V4S DKR has confirmed its qualities this year already. Apart from the penultimate day, where it struggled with a cracked half-shaft and got stuck in the sand twice, it always made it to the TOP 10. The Czech crew even made it to the TOP 5 five times and took a podium after finishing third in the eighth stage of Dakar Rally 2020.
“We had a beautiful Dakar on the Arabian Peninsula, which reminded us of the original African terrains a lot. Despite some technical issues that had stopped us from fighting for the podium in the penultimate stage, our Lady Praga and the whole team has been working consistently well,” said Aleš Loprais.
“What we’ve shown was a very promising performance by the Praga truck with a big potential for the future. This vehicle went through the hell on its debut and it did well against big factory teams,” he added.
“I’d like to thank our fans, friends, families and our partners for their incredible support in our amazing adventure. Let me mention especially companies and partners Instaforex, Praga, Chládek a Tintěra, Energy 69 and PSG as without their support, we would never be able to build this amazing Lady Praga. Now let’s head forward to do another big adventure!” shared Loprais his excitement.
Follow Instaforex Loprais Team at 2020 Dakar Rally:
https://www.facebook.com/InstaForexLoprais/
https://www.instagram.com/ales_loprais/
https://www.youtube.com/LopraisTatraTeam
https://www.flickr.com/photos/loprais-team/
19.1.2020 Dakar