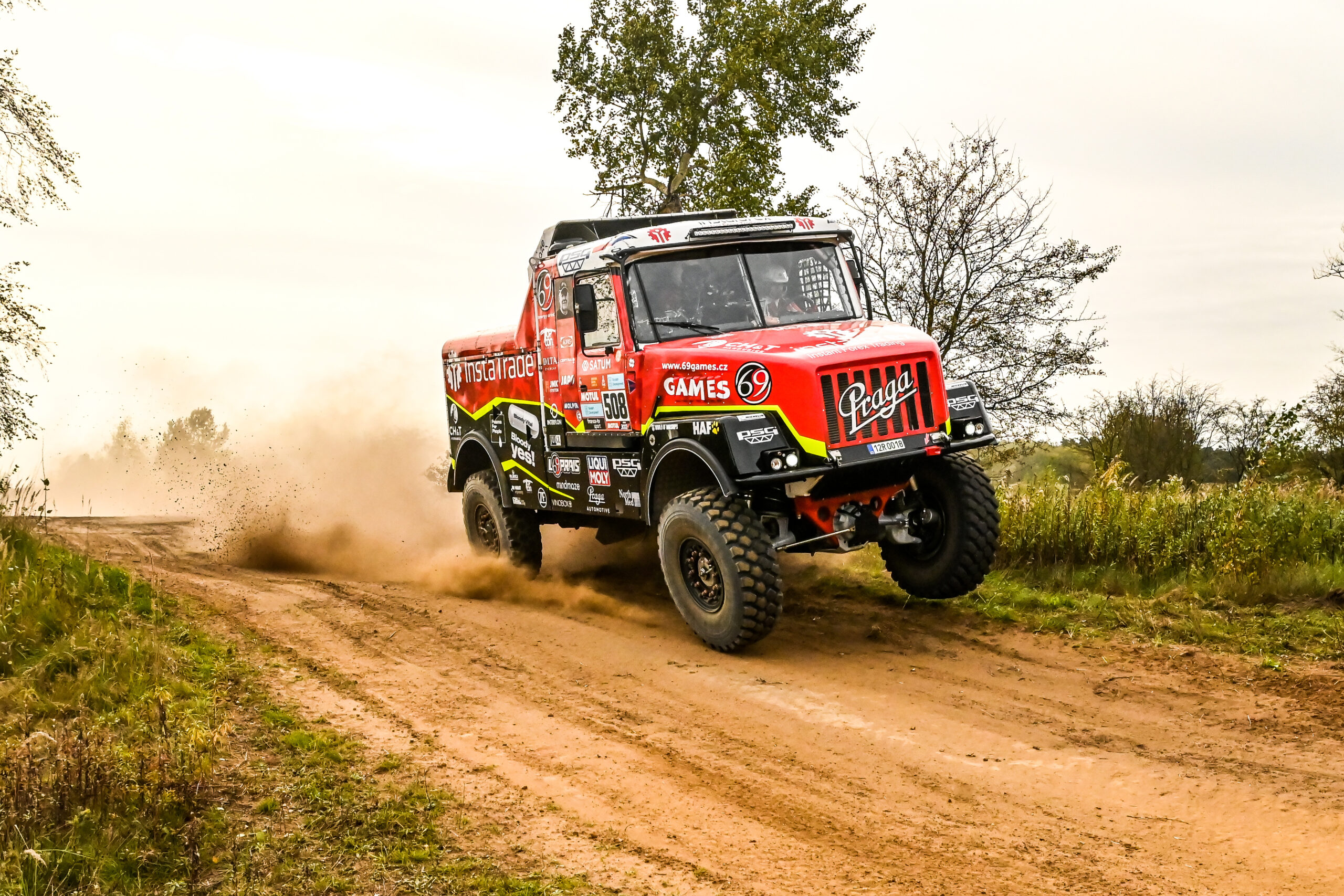 Loprais‘ strategy for a long Dakar 2023: To stay calm!

During the weekend, all racing and support vehicles of the Instaforex Loprais Team have left for Marseille in the south of France. On Tuesday, November 29, the team will go through the first part of scrutineering ahead of Dakar Rally 2023 there. After that, all vehicles and equipment will board a ship to Saudi Arabia, as the forty-fifth edition of the famous rally raid marathon is preparing to get underway on New Year’s Eve.

For the fourth time, the Instaforex Loprais Team will enter its Praga V4S DKR. A fully refurbished truck, with a different colour scheme, but without any major technical changes. The main reason for this is a long-term uncertainty over new technical regulations for the trucks category from the International Automobile Federation (FIA), especially the details about a date when they come into effect.

“Based on the information we had, we thought we would have to rebuild around a third of the truck, which we didn’t really want. There would be too many untested parts. However, the most uncomfortable thing was that for a long time we had no idea what we would have to change and how. Luckily, the waiting has paid off, because the new technical regulations are still not finished, and in the end, the organisers have allowed all vehicles with a previous ASO homologation to take part in the event,” explains Aleš Loprais.

“We made a few changes to strengthen the chassis, and to the transmission, but we opted to avoid any vast changes. This Dakar is supposed to be longer than in previous years, so we see our bet on a proven vehicle as the right thing to do.”

According to the organisers, the Dakar Rally 2023 will be longer in kilometres than in the previous eight years. In comparison to the previous edition, there are going to be two more legs and every special stage should be longer on average than before. That means more strain on the crews and their vehicles.

“That is understandable. Of course, it is possible to reduce the strain by going slower, but we all want to make a good result. So, the only way is to change each crucial component, just in case. That is how we can prolong the durability of the whole vehicle,” says Loprais, basing his words on facts he had learnt over his sixteen previous starts at Dakar and other marathon competitions. 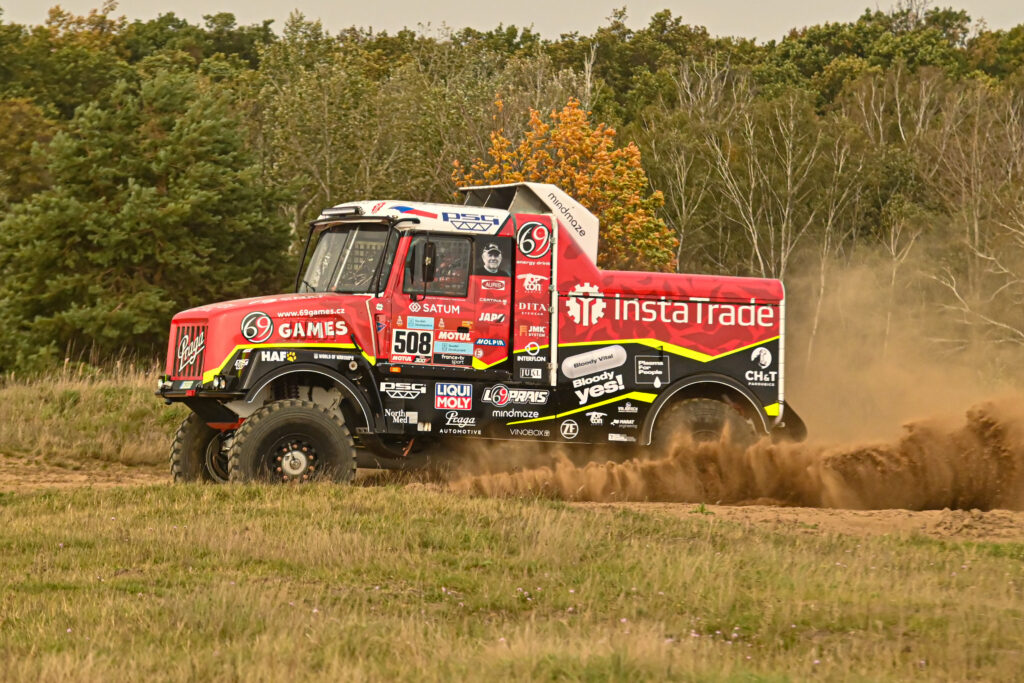 The Instaforex Loprais Team heads to Saudi Arabia not only with a proven vehicle but also with the same crew. There are no changes to the technical team as well, which is going to take care of The Lady, as the team calls the Praga truck, in bivouacs.

“The vehicle is great and tested. On the other hand, we haven’t managed to make it lighter. That would be such a major change, which is impossible when you don’t know how the rules are going to change. To spend lots of resources on changing the cabin, frames, and other things, just to hear from the FIA that we would need to do it all over again next year? That would be nonsense and lots of money thrown away,” explains Petr Pokora, who is going to take the role of an on-board mechanic for the fifth time in Aleš Loprais’ crew.

“To me, the best way to succeed is to have a good group of people, a good team, and a great mood in the cabin. And we have all that,” he adds.

Meanwhile, Jaroslav Valtr jr. continues to play his role as a navigator. He made his Dakar debut last year, and last time around, on his second start, he quickly welded together with the Instaforex Loprais Team crew.

“This year, I had something in my defense, as it was my first start with this crew. But this time, the guys will be already relying on me,” realises Jaroslav Valtr jr.

“But it’s true that there’s a chemistry between us. Even though it took three-quarters of the year for us to meet again for testing after the Dakar, it felt like it was just two weeks since the race. In just a second, we quickly got on the same wavelength again, just like at Dakar. It’s so easy to sit between Aleš and Petr and to start working together again.”

However, the Dakar Rally itself is never easy. Also, the upcoming Dakar is probably going to offer quite different dynamics in the trucks category, as the Russian manufacturer Kamaz will be absent from the event, with its four usually very strong crews.

“There’s a much bigger opportunity to get a great result, but on the other hand, there are others who will try to get in front, who maybe took a break a little before. I think it’s going to be much closer this time, which means a bigger pressure, but it can also make it much more fun. There might be many changes in the front.”

“Some drivers in the trucks category might experience what it feels like to be the first on the track, for the very first time. And that is not easy at all, because when you enter the dunes, and all other situations as well, you must rely only on yourself. It’s quite nerve-wracking to be in the first place, and for the navigator, it’s also entirely different from when you can follow lines from one or three trucks ahead of you. Then you get passed by a truck that started in the second place, and suddenly, that truck is in the same position now. It’s possible that a stage might be won by someone who has never won it before, and that can push them to extreme performances. However, the question is if they can handle it mentally and if their vehicles can survive.”

“From my point of view, this Dakar will be more interesting than the previous ones. But I also believe staying calm and keeping a cool head will be the key,” ends Aleš Loprais.

The Dakar Rally 2023 ceremonial start is scheduled for New Year’s Eve, on December 31, together with a short prologue. The first long stage will take place the following day, on New Year’s Day. There are fourteen scheduled legs in total. The competitors will start on the shores of the Red Sea, then head to a mountainous northwest area of Saudi Arabia before going through Riyadh to the Empty Quarter. In those majestic dunes, in the fourth biggest sand desert in the world, the crews will face three stages, including the marathon one. Those, who overcome all challenges and make it to the end, will finish in Dammam, in the Eastern part of the country on the shores of the Persian Gulf, on January 15.