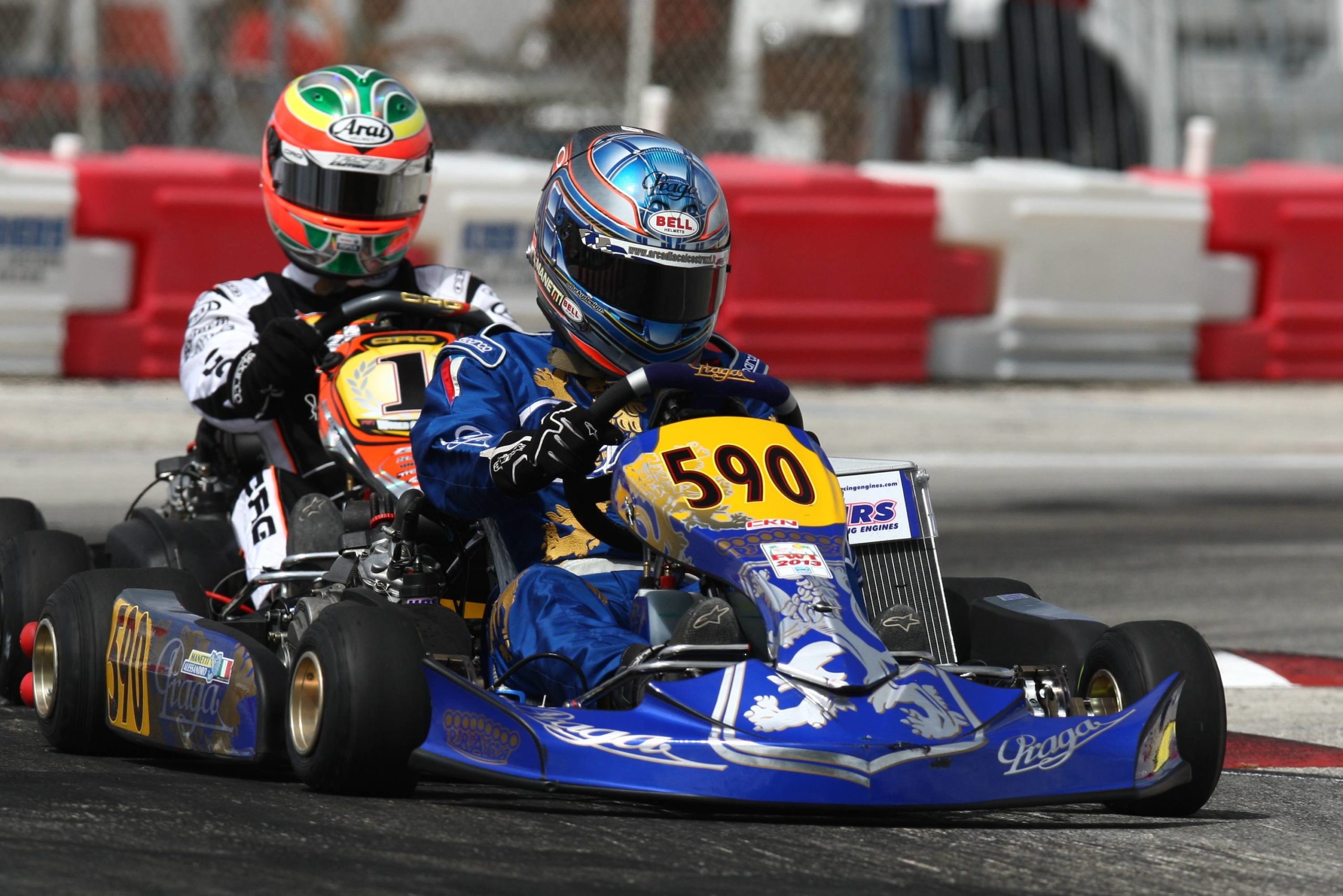 More Podiums for Praga at 2nd Round of FWT

Manetti proved an inspiration for many Praga drivers in Florida

24 February 2013, Homestead, Florida, USA — The second round of the Florida Winter Tour International Rotax Max Challenge is now complete and in a repeat of round one, Goodwood Kartways – IPK North America had impressive runs from both its veteran drivers and those sponsored and running with other Praga teams. Young drivers continued to find time and learn valuable lessons as well, and the combined effort netted five top-five finishes and three podiums at Homestead Karting.

Team Manager/DD2 pilot Marco Di Leo was on the podium Sunday, maintaining a strong Tour that sees him currently tied second in the points’ championship, but the buzz among the team began much earlier in the week when karting legend and Praga Technical Manager Alessandro Manetti got back behind the wheel to race Masters DD2! The five-time European Champion and two-time CIK World Champion proceeded to race last-to-second on Saturday in his debut and was on the podium once again on Sunday in race four, bringing the total to three.

“It was a great, great pleasure to have Manetti with the teams and especially in the driver’s seat,” Di Leo noted afterwards. “Everyone could feed off his energy and it was great to watch his preparation and energy level come race day. All could benefit, but especially the younger guys and those new to the sport. It was just a great opportunity for our guys.”

Second-year Praga driver Aleki Liverant agreed with the sentiment, noting there was much to be learned from such a storied veteran. “Having someone like Manetti around was definitely pretty cool,” he said. “Even if you don’t talk to him much, you can learn so much just by watching him and seeing how he approaches the race weekend.”

The Goodwood Kartways team certainly had a never-give-up attitude at the second round, as even when forced to race B-mains, both Liverant and Juan Manuel Casella won them in Senior and Junior Saturday, and on Sunday when only Nicholas Dapero was in the B field, he also took the checkered flag first.

“A win is a win, and for sure it builds the confidence within a driver that they carry to the next round.” Di Leo added. “You can see the drivers gaining from day to day, and our rookie juniors were seeing North American competition for the first time and certainly learned a lot. It’s always exciting to see new team members come along, and exciting to see how their results improve once they return home after racing with some of the best drivers in the world.”

“Winning the B final was a good experience,” Liverant said on the same topic. “I’ve had the chance to run close to the front at Homestead before and it didn’t go well, so to take the lead this time and stay out front to the checker was great. Sunday I knew I had a great shot to transfer to the main and I used my starting position to my advantage in getting there.”

It was one of many positive stories on Sunday, as along with the second-place podiums of Manetti and Di Leo, Juan Manuel Correa was fifth in Junior, Luis Schiavo was sixth in DD2 Masters and Justin Sirgany was ninth in Mini-Max. The FWT Rotax Max Challenge resumes March 22 at Ocala Gran Prix. For more information on how Goodwood Kartways – IPK North America can assist you there, please contact: marco@goodwoodkartways.com