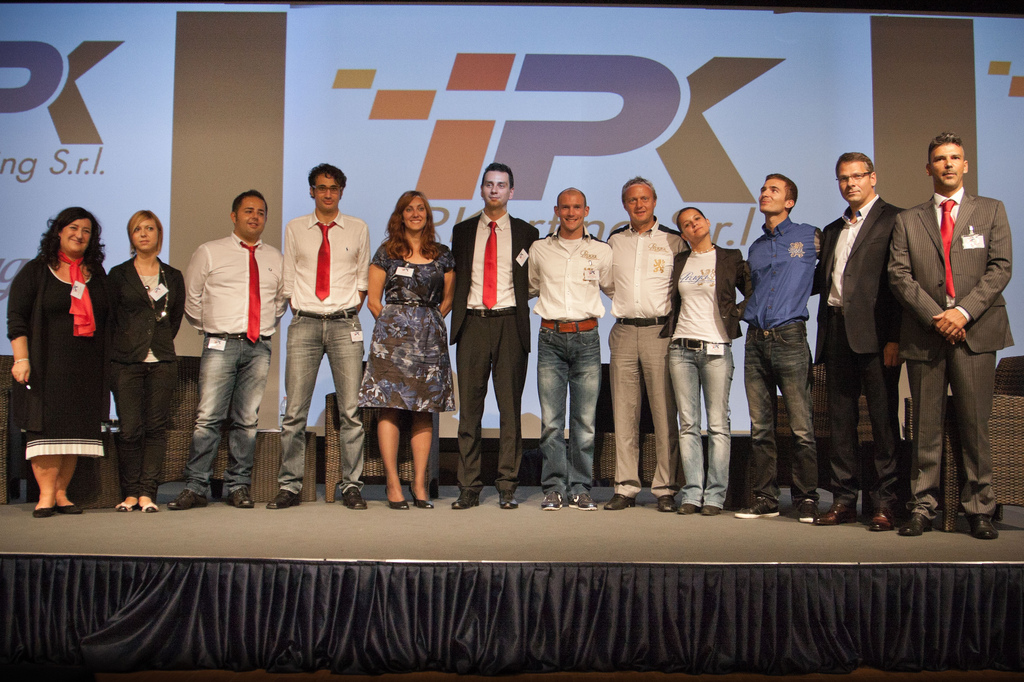 2 October 2012, Verona, Italy — IPKarting S.r.l., the manufacturer of Praga karts, held its first ever conference event for dealers this week, at the Hotel Parchi del Garda in Verona, Italy. The event marked several important announcements for the company, including the introduction of the new “re-branded” line of orange karts, called OK1. Praga was present at the event with its factory team Praga Kart Racing, along with Praga owner Petr Ptacek, the Praga marketing team, and representatives from Praga Racing.

IPKarting Chairman of the Board Daniel Sliva welcomed guests, and introduced how the company will be moving forward with its Praga and OK1 brands. The sales and commercial department presented the “orange” kart, a re-branded version of what was formerly known as Intrepid. The re-branding is strictly a visual one, and the OK1 kart still maintains all the technical aspects and details it previously held, only with a new name. Dealers were assured that the factory would help with the transition into this new brand, including providing new sticker kits and other kart accessories and team wear. The technical department then presented the new 2013 models for both Praga and OK1, discussing the technical upgrades that were made based on extensive trials and testing from the factory team. They also introduced the new line of rental karts (PRAGA Raceline EVO and OK1 Raceline EVO) and “entry level” karts (PRAGA Dark and OK1 Start), with a price point set to attract novice kart drivers.

Praga team manager Petr Ulbert spoke about the factory team, the work they put into preparing for their first season and the goals they achieved. Then it was time to hear from Praga factory driver and 2012 KZ1 World Champion Bas Lammers, who recounted his first season with Praga and his satisfaction with both the brand and the company. The new marketing and media features were also discussed, including the IPKarting website, where dealers can find all the information they need about the Praga and OK1 brands, as well as the many tools implemented by the Praga marketing team including the Praga team website, social media outlets Facebook and Youtube, and the Praga Journal magazine. CEO of Praga Racing Dusan Maly also spoke about the Praga New Generation racing program, which helps talented young kart drivers make the transition into professional racing, as well as introduced the new Praga R1 race car, which will be available in 2013.

The new Praga and OK1 models

The purpose of the event was not only to provide new information, but also to create a family atmosphere amongst the dealers, to let them know that they have a complete support system behind them from the IPK factory. This was certainly achieved, as many of the dealers were impressed with the level of professionalism displayed from IPKarting, and noted that an event such as this is unprecedented in the karting world. IPKarting and Praga are very pleased with how the event was received, and plan to make this an annual event for the dealers.

For more information about the new line of chassis, please visit the IPK factory site.

To see more photos from the event, visit our Flickr page.