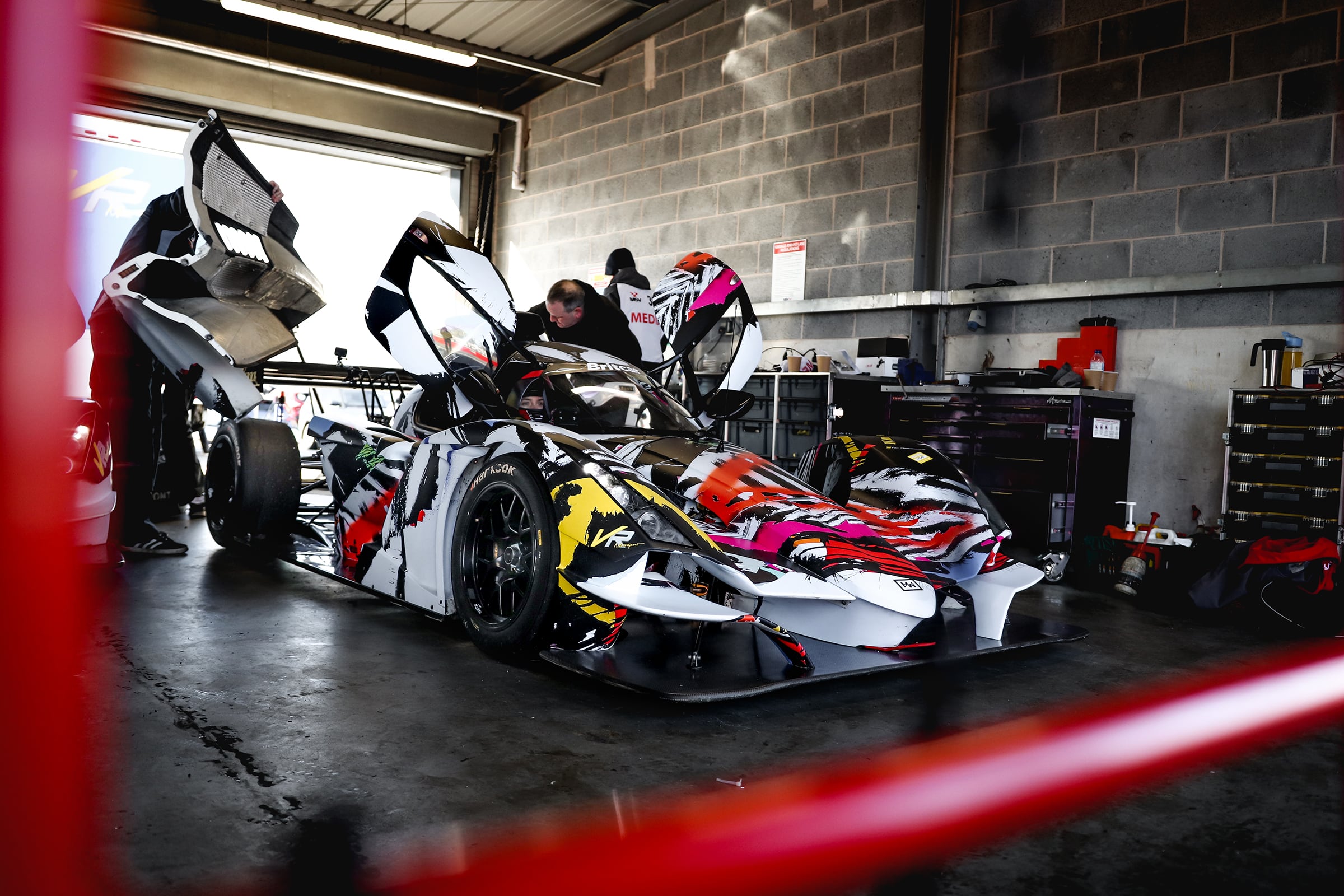 Successful shakedown for all three cars at Donington Park featured eight drivers, Coldplay, a giant fox and a work of art in the garage, bringing a unique flavour to the fault-free seven hours of testing.

2019 Britcar Class 1 winners VR Motorsport hosted their first full test session for the new three-car driver line-up at Donington Park on Thursday 12th March, ahead of what was due to be the first race of the season at the same circuit on 10th April. The successful day saw the Praga’s lap times and the garage atmosphere raise eyebrows and inspire confidence in the team.

Team Principal, Vincent Randall, said: “We are aiming to line-up on pole at the first Britcar race, as and when it is safe for all to get racing again. Obviously our focus now is with friends, family, and the UK’s motor racing community. Despite this, we remain focused and confident, and continue to plan for a successful 2020 Britcar challenge.

“The team is a really nice mix of experience, youth and enthusiasm. All six confirmed drivers have pedigree and potential, are highly competitive, but also have a great team ethic. We are fully ready and raring to go, setting out to win Class 1 and 2 and know that we’ll have to perform well at every race.”

Praga is entering its fourth Britcar season with Manchester’s VR Motorsport, with three cars taking to the track for the first time. Each car hosts a very different driver line-up representing Praga and Randall’s aspirations to offer opportunities to a wide spectrum of drivers. One car will be driven by aspiring teenage drivers Jem Hepworth and Danny Harrison; the second by the Coldplay-supported ex-servicemen Warren McKinlay and Martyn Compton; the third car will be piloted by Jack Fabby and Garry Townsend, a more traditional partnership similar to pro and Gentleman-driver line-ups in international racing.

With sponsors and supporters including Coldplay, Fox Transport – represented at the testing session by company founder, Richard Fox in his vibrant vulpine outfit – and Danny and Jem’s proud parents, the mood in the garage was upbeat. All six drivers focused on the job in hand and finished the day optimistic for the season ahead: for the majority of drivers, a challenging season that will be their first in an aero car that delivers over 600hp/tonne in turbo set-up.

The Praga R1S will be driven by ex-servicemen Compton and McKinlay under their Stand2 Motorsport brand – Stand2 is a term used in the Army to get prepared and ready for action. Compton, the 36-year-old from Exeter has used motor racing to overcome life-altering combat injuries and PTSD. His story inspired Exeter-born Coldplay lead-singer Chris Martin to get in touch out of the blue and support him in his racing endeavours and rehabilitation. 38-year-old McKinlay from Essex formed the Stand2 motorsport business with Compton having met at the KartForce motorsport charity during his own rehabilitation from mental and physical injury. He can’t claim to be supported by a global rock star but aims to race with Compton on the world’s biggest stage, the 24 Hours of Le Mans in 2024.

Last season’s class-winning Praga R1T Evo will be piloted by Fabby and Townsend. Fabby is a 20-year-old motorsport professional. As technical manager, test and development driver at Tiga Race Cars in Cheshire he has experience of LMP2 cars as well as having raced successfully in the Open Sports Car Series. His partner, Townsend, brings wisdom and years of experience racing Mazda MX-5s and takes to the track for the first time in such a high-downforce aero-style racing car.

The new Praga R1T Evo ‘art car’ piloted by Hepworth and Harrison was the fastest on track at Donington Park, with Harrison setting a 1’27” lap time late in the afternoon. Having won the opportunity to test the Praga at 2019’s MotorsportDays Live, the 19-year-old from Essex surprised everyone with his first serious laps. 18-year-old Hepworth also had a successful day’s testing, just 11 months since first jumping in a racing car with Team Motorsport Woman. In her rookie year she helped Team Motorsport Woman to fifth in the Citroen C1 24 Hours at Silverstone, setting the fastest lap in the process – in the middle of the night. Seven years of karting has provided her with a competitive edge that will prove invaluable in the Praga.

The Praga racing cars have proven successful in recent seasons in the UK, US, Dubai and Dutch challenge race series’ and continue to turn heads, especially on the track with their aero-inspired late-breaking advantages and speed through corners. Built in a bespoke factory and shaken down at the challenging Slovakia Ring, just a few kilometres from the factory, the Pragas offer a unique combination of low-weight and high-levels of safety from their carbon chassis and monocoque with strong aero performance and reliability. The car’s simple but effective engineering also means both models are comparatively inexpensive to buy and run when compared with GT3 and GT4 cars that they compete with on-track.

The Praga R1S and R1T Evo are available in the UK at https://www.vrmotorsport.co.uk/contact.html.

Praga Cars developed the R1R in 2015, a road-legal prototype of the R1T racing car, that received critical acclaim and strong fan reaction. The one-off extreme sportscar was tested by a small number of highly respected journalists and car enthusiasts across Europe, taking in some of the best driving roads in the UK, a long-distance road trip from Monaco to Barcelona, and even a sub-zero drive through Sweden. Since then the car has remained at the Praga Cars headquarters as the company focused on developing its racing programme, but this summer it is expected to return to the UK and Europe for some select car shows.

Praga will present a brand new website later this month, but for more details about Praga’s R1 racing activities as well as the company’s karting business and its more than 100 years of manufacturing heritage, please visit: www.pragaglobal.com.