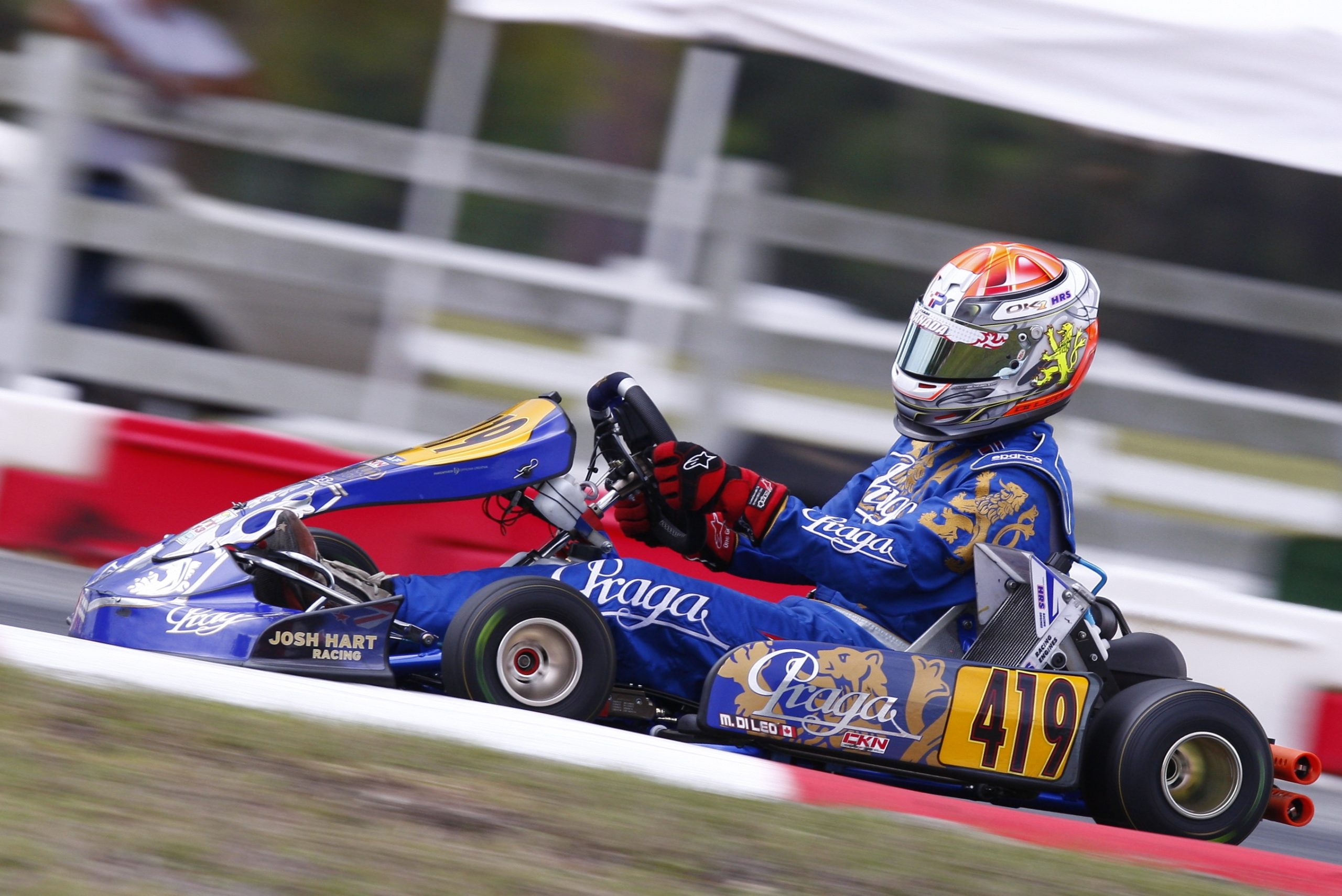 2 April 2013, Ocala, Florida — The final round of the 2013 Florida Winter Tour International Rotax Max Challenge took place on 23-24 March 2013 at the Ocala Gran Prix, and Praga North America finished the series with an impressive 3 podiums over the two race days. Again at the wheel in DD2 Masters, Praga Technical Manager Alessandro Manetti gave Praga North America its first victory in the championship, with a fantastic 1st place finish in Saturday’s final. Meanwhile, Team Manager and DD2 pilot Marco Di Leo drove strong all weekend long, taking 2nd and 3rd respectively in the finals. His placements in the final round put him second overall in the championship, earning him a coveted ticket to compete at the 2013 ROTAX Grand Finals in November.

For Sunday’s races Di Leo qualified 3rd and Manetti 1st, but Sunday proved to be more difficult due to wet conditions throughout the day. Manetti ran an impressive pre-final, but was penalized at the start, and finished 4th. In a very wet final, Manetti was unfortunately unable to recover from the conditions and retired early due to technical problems. Meanwhile in DD2, Di Leo took an amazing 1st place in the pre-final, but faced a torrential downpour in the final and still finished with an impressive 3rd place. This put him 2nd in the championship points, and gave him a well-deserved place among the world’s best for the ROTAX Grand Finals.

“I’m really happy to earn a ticket to the Grand Finals this year,” Di Leo said following the finale. “It was my first full championship in DD2, and to finish runner-up and earn a Grand Finals ticket is quite satisfying. FWT brought some top drivers from karts and cars, and it was great to battle it out with the boys and learn about the DD2 chassis in the process. It’s extra special to be going to NOLA for the 2013 Grand Finals this year as it is somewhat home turf. I look forward to continuing the Canadian success in the DD2 category.”

A number of other Goodwood Kartways – IPK North America team and affiliated drivers had satisfying results in Ocala as well, notably two of its youngsters. Xavier Harris was an arrive-and-drive racer two years ago, last year he stepped up to club and regional racing in Eastern Canada, and in just his fifth start in Florida he put his OK1 kart on pole position! With multiple opportunities to qualify when he returns home, Harris could definitely be joining his team manager at the 2013 Grand Finals. The same could be said of his teammate Jeremy Tallon. Among the youngest competitors in Florida this year, Tallon was over five seconds from pole in his debut weekend, yet by his final start at Ocala he was just 1.1 seconds off and continuing to improve. Tallon has multiple years of Micro-Max remaining, but may just snag a Grand Finals trip early with three being awarded from his home Eastern Canadian Karting Championship.

Goodwood Kartways – IPK North America and its Canadian dealer network now set their focus on the upcoming summer season, with the Eastern Canadian Karting Championship being their primary schedule.

“The IPK crew is really looking forward to the ECKC schedule and kicking off with another strong start at Mosport,” Di Leo concluded. “We’re looking forward to seeing Praga Racing Ontario make its debut to the ECKC and hope we can continue to achieve strong results. The 2013 IPK product is now available and faster than ever so we are anxious to hit the pavement with familiar faces back home in Ontario.”