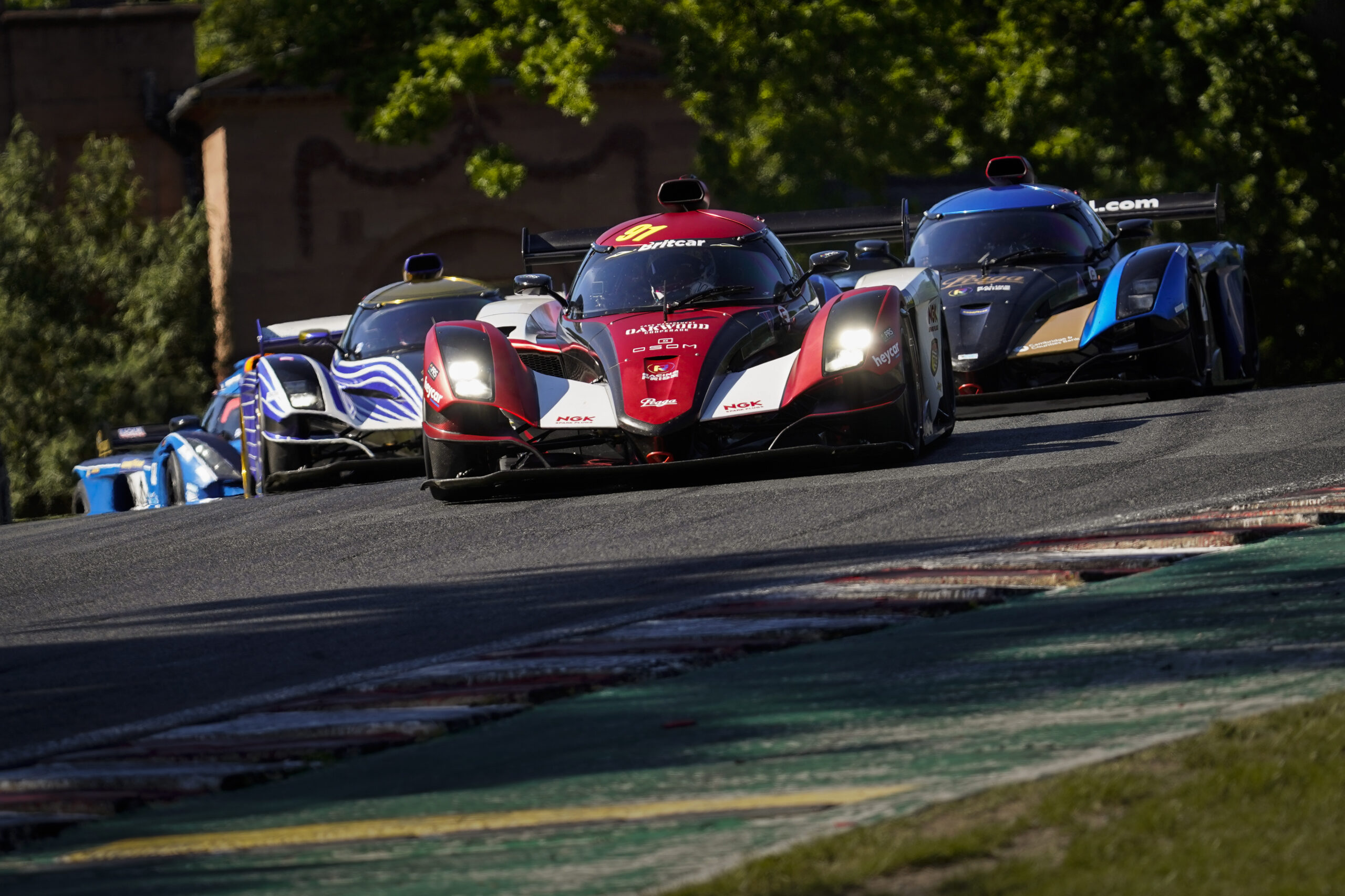 Praga on Cloud 9 with double victory for Praga Racing Academy

A record nine Pragas took to the grid at Oulton Park on Saturday 12th June in Round 3 of the Praga Class within Britcar Endurance. And all 9 cars locked out pole to 9th in qualifying in a perfect example of Praga power at the track that Praga Cars UK considers its ‘home’ circuit.

Adventurer, explorer and ex-SAS officer, Jay Morton, scaled a new peak last weekend as an R1 Guest Driver in the Praga Racing Academy team as he won his first (and then second) race in just his 9th and 10th competitive outings.

Partnering with pro-driver Angus Fender (representing Cambridge & Counties Bank), novice driver Morton built the solid foundations from which Fender forced home the victories as Praga Class and overall race winners in both races in Round 3 of the Britcar Endurance Championship.

To add to Praga’s success at its ‘home’ circuit – just two days after Praga Cars UK opened its official HQ in nearby Antrobus – a record nine R1s took to the grid in positions one to nine after qualifying, and the Czech brand’s dominance was completed by taking all three podium positions in both races.

Praga Cars moves into top gear in the UK

Mark Harrison, Praga Cars UK Managing Director, said: “It was an amazing result for Jay and Angus. Jay has only just graduated to racing a Praga after being fast-tracked through club racing to National A with our Praga Academy programme in partnership with Motus One. In only his 3rd race in a Praga R1 he is a winner! Proving the R1 is perfect for novices and professionals.”

“We saw at Snetterton when he debuted in the car in horrendous conditions and almost secured a podium that he had what it takes to be a racing driver, and it shouldn’t be a surprise given his background. But turning potential into reality is not guaranteed, so his recent work with Ben Collins and racing with Angus has prepared him well,” Mark also pointed out.

A record nine Praga R1s took to the grid having secured positions one to nine in qualifying with the four customer cars narrowly pipping the five factory cars to the top four slots. Pole sitter, and ex-Radical and Revolution racer Richard Wheeler, led out in last year’s Britcar Endurance championship winning R1, ahead of the 2021 spec R1 of CW Performance.

Confusion at the start with the pit lane window opening left several cars starting from the pits, including the Guest Driver R1s of Lacey/Walker and Broadbent/Hepworth, but within 10 minutes of the one-hour race, all nine R1s were back battling in the top 10.

Close battles ensued between all nine Pragas for the first third of the race before the pit lane window opened under safety car conditions. After yet another chaotic pit stop under safety conditions following the drama of the Snetterton races, CW Performance took the lead over the Kapadia/Wells R1 in an exhilarating battle for the top two places.

Meanwhile, Morton, who enjoyed a faultless pit stop, set-up a solid foundation for Fender who very quickly moved into 3rd and rapidly chased down the leaders taking advantage of their battle to set faster lap times in clear air. The three R1s then enjoyed a superb battle for a number of laps before hitting traffic and having to deal with back-markers. This allowed Alex Kapadia to extend his lead over CW Performance and Fender’s Praga Racing Academy car.

Behind the three leaders, technical problems for ‘Goldie’ – the car piloted by Broadbent and Hepworth – and Eaton and Mutch’s 333 removed them from the race, but with just eight laps left, seven of the top 12 cars were Praga R1s.

Another safety car then brought the four leading Pragas together and at the green flag CW Performance and Praga Racing Academy got the jump on Kapadia, with Fender squeezing through into the lead. The 2nd and 3rd placed Pragas then got caught behind slower traffic giving Fender’s #85 car the chance to build a race-winning lead of over seven seconds in just two laps. And offering Jack Fabby in ‘Ruby’ the chance to catch the podium-placed cars.

Fender maintained a solid eight second lead to secure his maiden competitive race win – as well as Morton’s – with Kapadia in the Tim Gray Motorsport-run car 2nd and CW Performance in 3rd.

With seven Pragas in the top 10, it also meant that Praga joins Lamborghini and Ferrari as overall 2021 Britcar Endurance race winners.

The drama of seeing a fleet of Pragas enter the first corner toe-to-toe at Oulton Park was repeated in race two, but with eight instead of nine as ‘Goldie’ started two laps down following the technical issues that bedevilled the Broadbent/Hepworth car in race one.

The eight Pragas led out, with the Kapadia/Wells, Morris/Wesemael and Eaton/Mutch R1s making a very quick getaway. This left the cars of Martin, Morton, Walker and Bridle in a hugely entertaining four-way, lap-after-lap battle that drew gasps from the first crowd of the season since Covid rules were relaxed.

Yet another safety car arrived just as the pit window opened bringing together the top six Pragas nose-to-tail, but unfortunately for the race leader, it opened just seconds after he had passed the pit entrance. The Broadbent/Hepworth car also missed the pit lane window, whilst the Lacey/Walker car ran an additional lap under safety car conditions suffering gearbox issues that limited the car’s true potential.

Mutch, Fabby, and Fender were fast out of the blocks when the flags flew green with 30 minutes of racing remaining. Fender took Fabby in a smart move for 2nd then, after 10 minutes of exhilarating racing, spotted the opportunity at Old Hall to take the lead, holding off Mutch – who got caught in traffic – for the next 20 minutes.

The two young rivals had just 1.2 seconds between them as they headed into the last two minutes before Mutch again got caught in traffic, ensuring Fender and team-mate Morton had the perfect day with the double win.

Behind, a stunning run from Alex Kapadia saw the Tim Gray Motorsport-run car 111 secure 3rd place from the back after the pit window confusion with a series of fastest laps. 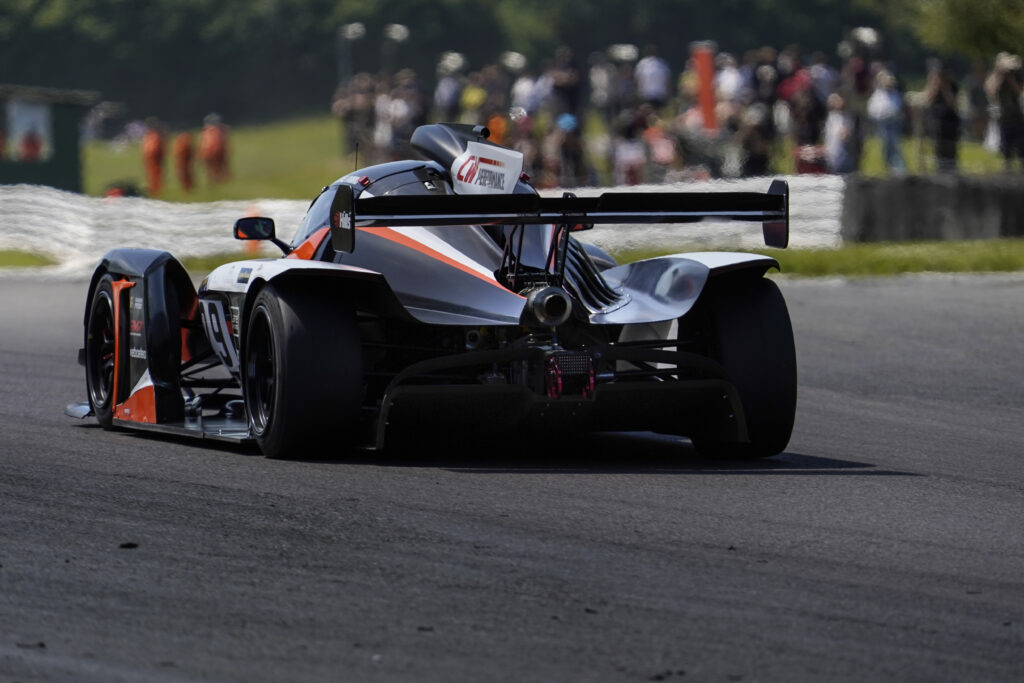 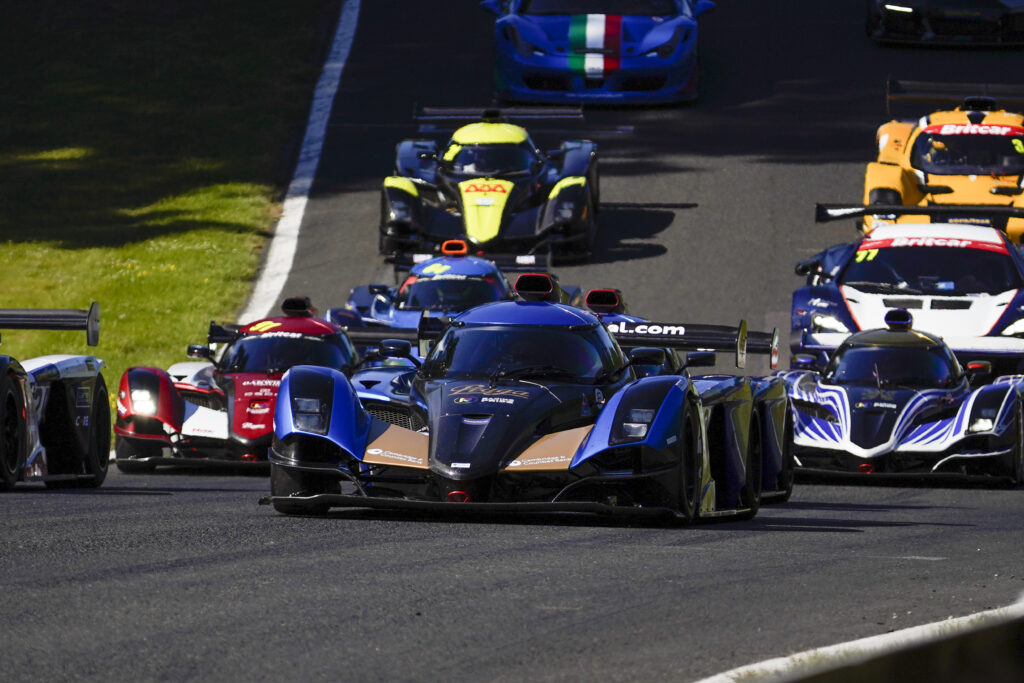 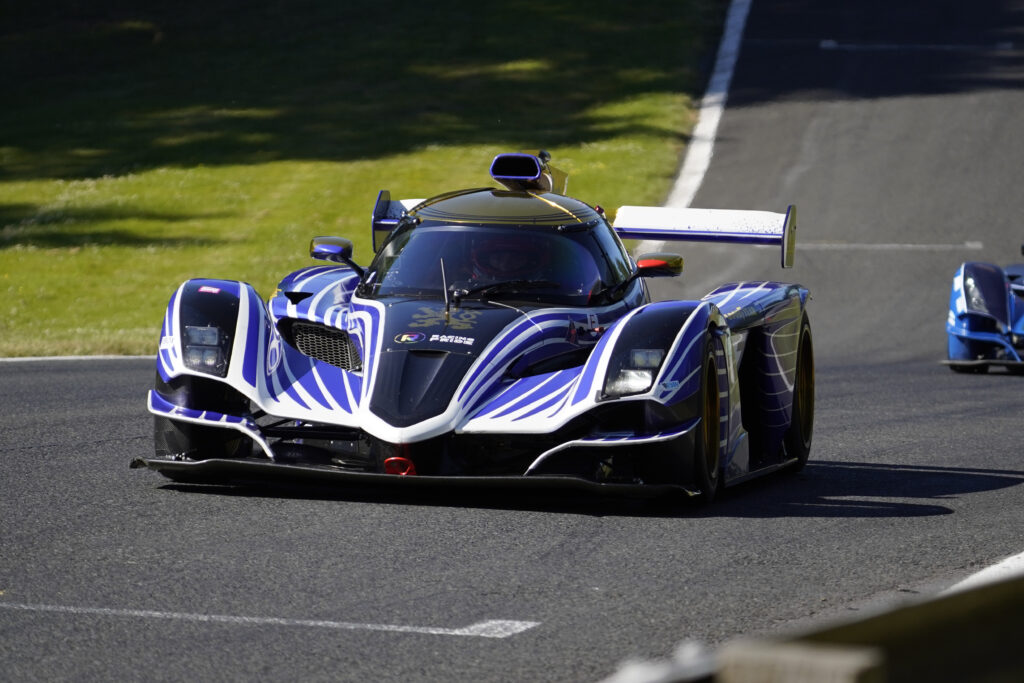 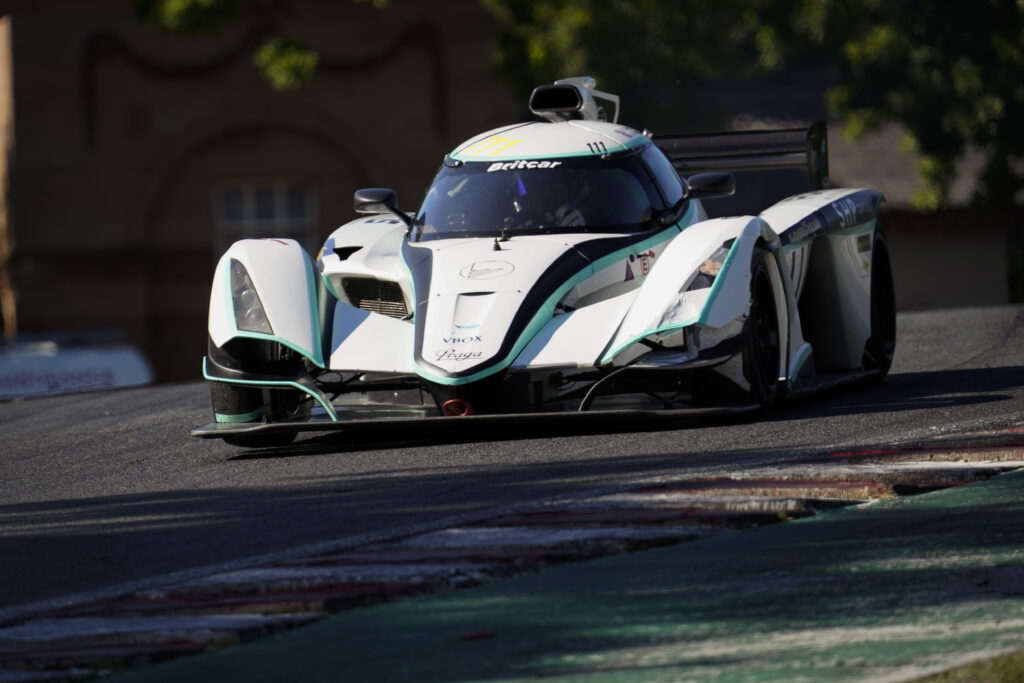 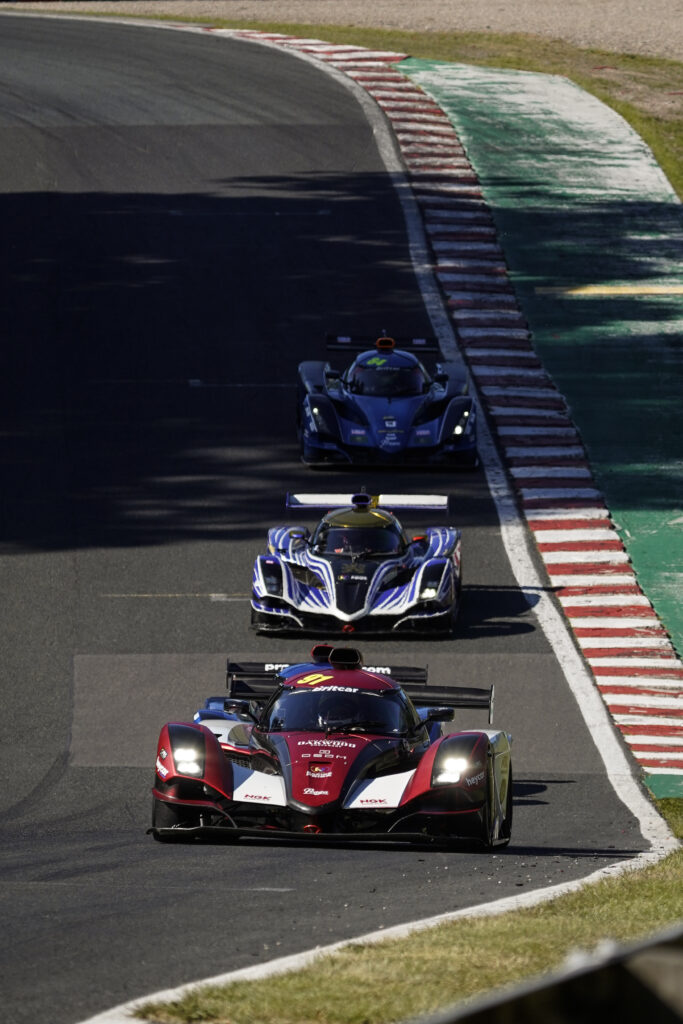