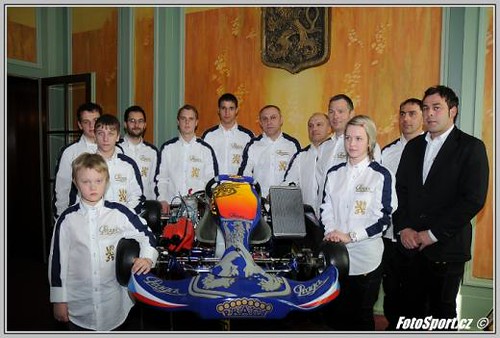 Praga announced its return to the world of Motorsport through a partnership with Intrepid Kart Technology during a press conference at the Automobile Club in Prague, Czech Republic, on 29 March 2011. The official announcement, which was made in January of this year, during the 2011 Kart and Race Expo in Montichiari, Italy, sees Praga financially invested in a joint venture with the Italian-based Intrepid company. During the press conference, journalists heard a short presentation from the two company’s main partners, Petr Ptacek of Praga, and Mirko Sguerzoni of Intrepid, followed by a presentation of the two teams that will represent the Praga brand: Praga Sumako Team and RF Racing.

Says Intrepid partner Mirko Sguerzoni: “We have a lot of common plans. We are currently both using a brand chassis homologation. But already we are preparing for a new homologation period, both brands will be specially homologated. We not only work well in karting, but also is currently working with Abarth from Formula, and even some of the F1 teams.”

Petr Ptacek adds: “We want to get Praga into the limelight and establish it as a well-known brand. There will be a lot of work, but I’m looking forward to it. We are even going so far as to prepare our own racing car manufacture, but more details will be revealed later on.”

The Praga brand is currently defended by Dutch driver Beitske Visser and Uruguayian driver Santiago Urrutia through the Intrepid Driver Program, as well as two Czech teams with drivers that compete at the national and international level. The Czech teams are:

Also present at the press conference were race drivers Roman Kresta and Martin Prokop, whom Praga support in automobile racing.