Praga Racing Team came strong to final race of SuperCar Challenge season to Assen. Not only in numbers with 4 cars and 7 pilots, but also in confidence. Latest machinery from Slovakian team with forced induction engine was hopefully powerful enough to fight so far unbeatable Radical’s SR8. At least on paper. But one do not prove his capabilities by specifications. Being faster round a track is the only thing that matters. Therefore everyone was really very curious, how would Praga R1 turbo (still just prototype) handle it’s much powerful competition for which naturally aspirated 2.0 litre 4-cylinder Praga R1 was simply not match. Original intent was not to race the car, just do some more testing and adjusting…

We took part in both private and one pre-race free practice during Friday. The team had a lot to catch up with. Praga R1 turbo with Danny van Dongen (test and race driver) drove with start number 701. There were a lot of adjustments and testing needed in finding the fastest set-up. During the whole day, mechanics were changing complete suspension, damper set-up, stabilizers, front and rear axle geometry and ride height. Just to find optimum i.e. fastest setup for the track in Assen. Some of new set-up combinations will also help make n/a Praga R1 faster in the future. Turbo prototype’s biggest issue is excessive heat round turbocharger. Problem that took the most of the pre race preparation time in Praga garage. Best Friday’s free practice time was 1:36,6 which was already highly competitive in comparison to the fastes cars in Superlights category. That gave whole team a good night sleep and high hopes for Saturday’s qualification. 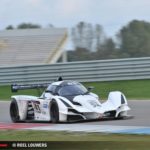 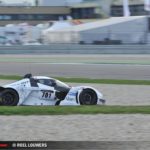 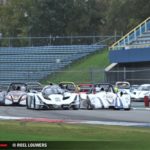 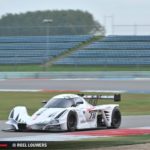 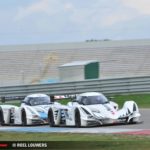 Unfortunately, Praga R1 number 706 did not get much chance for testing on Friday. Thursday info was there’s need to change half shaft’s, but it was clutch that needed replacement. Hence only second private free practice for Vincent le Sage and Diego Duez. Robert de Graaff took only official Friday’s free practice, but learnt the track well.

Saturday’s qualification was considerably shorter after a hard crash with some serious injuries in different category took place. Danny van Dongen managed to shed off some 1,2 seconds in very last minutes after some minor yet crucial adjustments were made. With unbelievable 1:35,4 he took pole position with some half a second margin to the second position driver Martin Short in Radical SR8 and all the other Radicals. Just for comparison how much faster Praga R1 turbo prototype is, last year Praga R4S took the fastest lap of the whole race with 1:38,4 with Beitske Visser at the wheel. That is exactly 3 s difference…

Car number 706 did not do much in qualification after minor off track experience that damaged left rear push-rod. Meanwhile Robert de Graaff managed to lap the track in 1:43.847, which was good enough to get in the middle of Radical SR3 field. His time was the fastest among n/a Praga R1 pilots. Nelson van der Pol was just half a second slower. 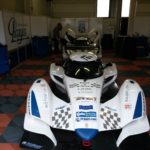 Praga Racing Team originally did not plan to put R1 turbo in proper race. Since everything went better than expected, and with pole position it was easy to accept new challenge and take part in Sunday’s race. Saturday’s evening debate brought in will to go head on against unbeatable Radicals SR8 for the whole season. First race begun perfectly. Praga R1 turbo led the race under heavy pressure from two SR8 especially on long straights. In corners however R1T was faster and clearly showed it’s overall potential. First few laps brought competition and really interesting race to watch. But it did not last long as Danny van Dongen slowed down significantly with times dropped to 1:41’s. As found later, exhaust manifold failure damaged induction part with hot fumes which led to power decrease. Several laps later front wheel hub went loose and this forced Danny stop the race. Even though this may look sad, everyone in Praga team is actually really happy about it. This performance gives us very good motivation for next year.

Praga R1 pilots in the race: