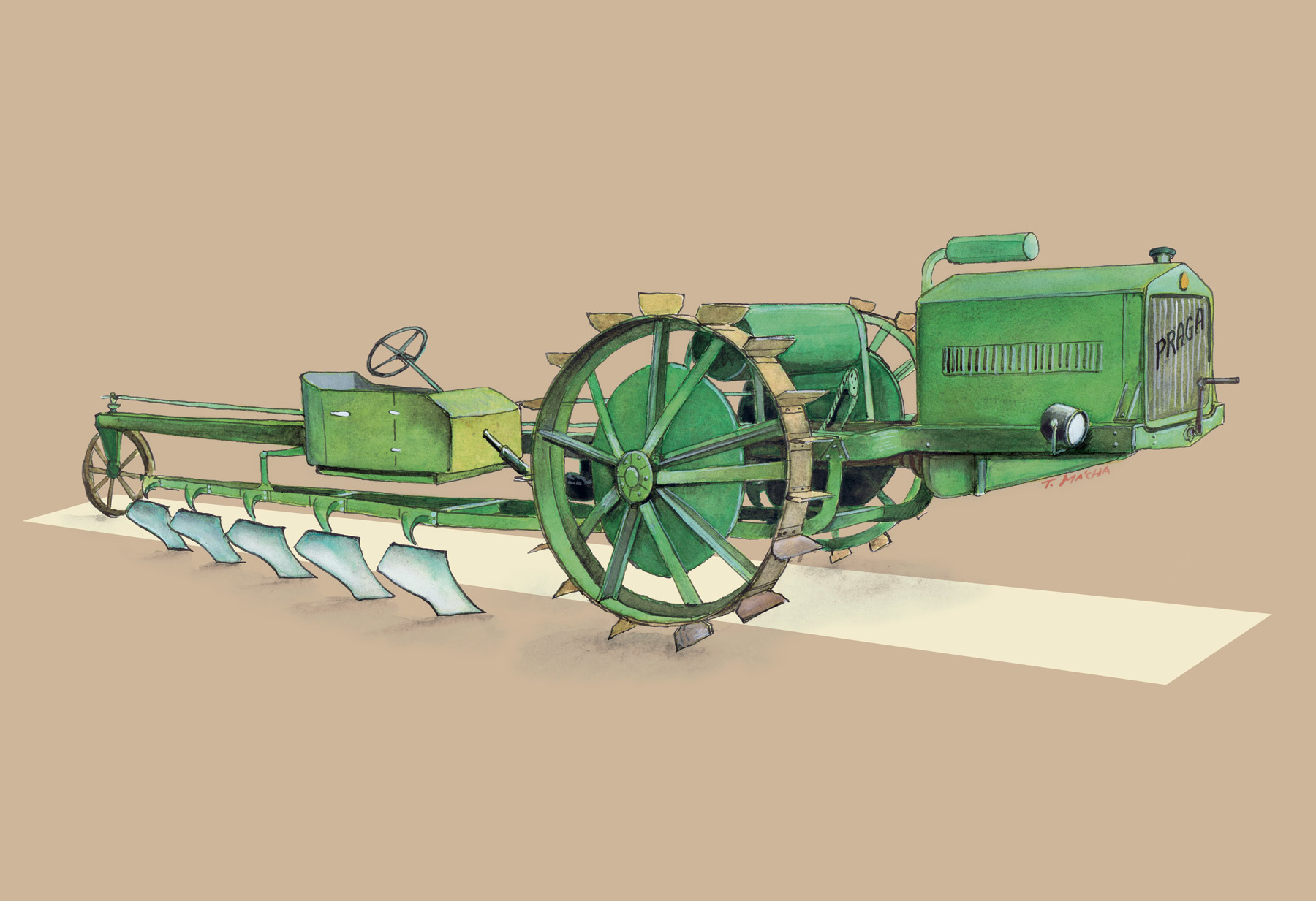 Our last issue was concerned with the history of Praga’s engagement in racing and motorsport; but now, let us emerge in one of company’s probably less known activities: the production of agricultural-related machinery. When the brand PRAGA was born, there were only a few machines included in the process of the initial cultivation of soil; this was done mostly by traditional ploughs towed by working animals and operated by a farmer.

However, the previous development of steam machinery in general inspired engineers and scientists to search for better and easier ways to get the ploughing work done. Later, the rise of the petrol engine lead to similar endeavours and first motor ploughs were born. We might say that these represent a transitory state between the traditional and automatized ploughing done by ploughs towed by tractors, which is the form that prevailed in the end and is still in use today.

But this very employment of machines in the process of ploughing is also a fact with a strong symbolic significance. With ploughing being one of the toils of human condition, this progress in technology was an important mark promising brighter future and well-being of the human race. At the same time, the traditional cultivation of soil was considered by some to be very important and therefore this technological involvement in the process was sometimes interpreted as its corruption.
Praga began to manufacture motor ploughs in 1913 and continued with it until 1925 with the total of three models produced. Since they proved to be able of a good fieldwork, the number of produced vehicles topped one thousand and rose even more after several factories purchased licenses for these motor ploughs.

Nevertheless, the invention of a tractor vehicle brought downfall of all motor ploughs. The first official tractor was constructed in the USA in 1901 but it took some time for it to succeed as the principal machine used for ploughing and soil cultivation. Praga produced small tractor vehicles beginning with Praga AT (1928 – 1942) which was ideal for both road and field surfaces owing to its option of wheels specially designed for ploughing field surfaces. In total, Praga produced over 500 vehicles of this type. Later, the company added two similar models caller Praga BDk (1928 – 1932) and Praga KT (1929 – 1930). These small vehicles represented a progressive element in the farming at that time; but became marginalized with the rise of larger tractor vehicles which were (and are) – as we all know – used ever since.

To sum up, Praga’s involvement in the production of agricultural machinery was not significant in the amount of the produced vehicles (although the numbers are hardly negligible) but remains extremely important in the historical context of modernization and mechanization of an important sphere of human activities. And we might add that it also illustrates the large range of business activities of the company in the first half of the 20th century.