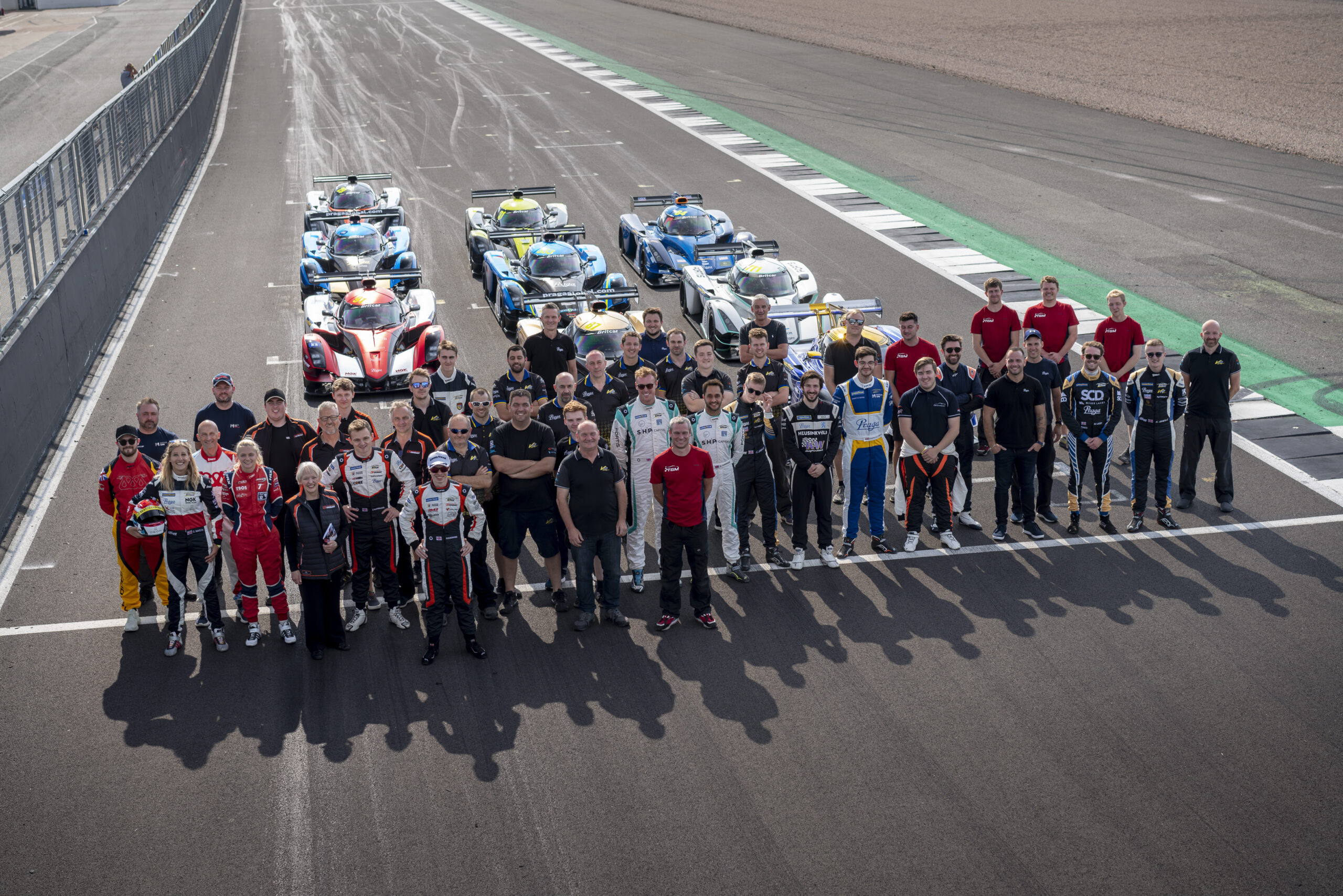 The Praga Class within the Britcar Endurance Championship returned to Silverstone for the two-hour endurance race on the full GP circuit and, for the first time in two seasons, ran an almost textbook race weekend.

With nine R1s on the grid, locking out the first four rows, and three of those cars coming home first, second and third after 120 minutes of dramatic racing, the action on the track fulfilled all expectations. Off the track, and after 15 months of restrictions, race day was at last experienced by an invited group of hospitality guests with a perfect view of the start/finish line and pits from the Silverstone University Technical College terrace, paddock visits and appearances from all of Praga’s Guest Drivers.

At the home of UK motorsport, Praga Cars also had the opportunity to agree next steps with Britcar to help organise a Praga one-make race series for 2022, targeting 20 R1s to race within select Britcar weekends and other race days at home, plus, potentially, in Belgium and Holland working with Praga’s newly confirmed Benelux dealer partner. Final agreements were made at Silverstone on Friday with the Belgian-based experienced motorsport team, and full details will be announced soon as they join newly appointed R1 dealers in Australia and the USA in Praga’s first international network of Praga Racing retailers.

The drama continued until 18:00 GMT when three Pragas crossed the line ahead of the chasing pack after two hours of dramatic racing, with a combination of customer teams in new generation and older generation cars, plus the factory-supported Guest Driver pairing of Charlie Martin and Jack Fabby.

Mark Harrison, Managing Director, Praga Cars UK, said: “Finally we got to experience and execute a ‘proper’ race weekend with dramatic and exciting racing watched by a great crowd in our hospitality suite at the Silverstone University Technical College. A small group of college students helped us and experienced first-hand what a race weekend looks like, and we were able to build on conversations with R1 prospects plus fine-tune arrangements for our new R1 dealers and plans for the 2022 one-make Praga Cup. It was a very exciting couple of days all round and really feels like life is getting back to normal.”

The weather had been uncertain for most of the day, however, the day started under dry conditions. The customer car of Richard Wells and Alex Kapadia claimed pole position in qualifying with an impressive margin of over a second, with the Praga Three Lions car of Gordie Mutch and debutant Ash Dibden claiming the second front row slot.

The race got off to a clean start with the first rows holding their positions, as Richard Wells leads the pack with Ash Dibden and Richard Morris in hot pursuit. Around 15 minutes into the race, a dark cloud loomed from the south and began to rain down on Stowe corner at the far side of the track. As drivers began to struggle in the worsening track conditions, the pit lane became a hive activity as teams prepared for tyre changes. Ash Dibden raced into the pits from the lead, shortly followed by Jimmy Broadbent, and Jay Morton for wet tyres.

With the heavy rain passing quickly over the track, the Stowe side was already dry as the rain battered the pits to the north. In the #7 Team Praga Racing car piloted by Miles Lacey, and featuring the livery designed by Frank Stephenson, the decision was made to keep the car out on slicks and ride out the weather. This decision was pivotal, and Lacey was able to capitalise and take the lead of the race.

With the drivers having to complete a minimum of 40 percent of race distance each, the pit window did not open until the 48th minute – a time where the drivers usually find themselves in the closing laps of a race. Lacey handed over the car to James Walker, Mr JWW, with a commanding 28-second lead.

Further down the field, Jay Morton pitted to hand over the #85 Praga Race Academy car to his new teammate, former BBC Top Gear ‘Stig’ Ben Collins, who wasted no time climbing back up the order.

Having swapped with Charlie Martin into the #91 Powerhouse Performance by Praga car, who also opted to battle through the rain on slicks, Jack Fabby was on a mission and drove flawlessly to take the lead with 50 minutes left on the clock. With Chippy Wesemael now at the wheels of the privately-entered CW Performance Praga R1, the battle was on for the race win.

In the closing stages, Wesemael made a late charge to try and snatch the win from the leading car of Fabby. As they crossed the line, the two were separated by the blink of an eye – a gap of just 0.675 seconds. The joy of the podium celebrations and the sweet taste of champagne were to be short-lived, however, as it was deemed by the stewards that Fabby and Martin’s pit stop was 4 seconds short, and handed out a 34 second time penalty, which handed the win to the CW Performance Praga of Wesemael and Morris and relegated Fabby and Martin to a very respectable second place.

Rounding off the podium were privateers Alex Kapadia and Richard Wells, with Rod and Elliot Goodman finishing fourth in the Motus One run machine. Jimmy Broadbent and Jem Hepworth brought ‘Goldie’ home in fifth place in class, ahead of former-Stig Ben Collins and Jay Morton who finished sixth. Gordie Mutch brought the 333 car home seventh in class after having to serve a drive-through penalty for a short pit stop having taken over the reigns from Praga debutant Ash Dibden. Despite a valiant effort from Miles Lacey in the first stint, James Walker retired their R1 with gear shift issues which limited the car’s potential. 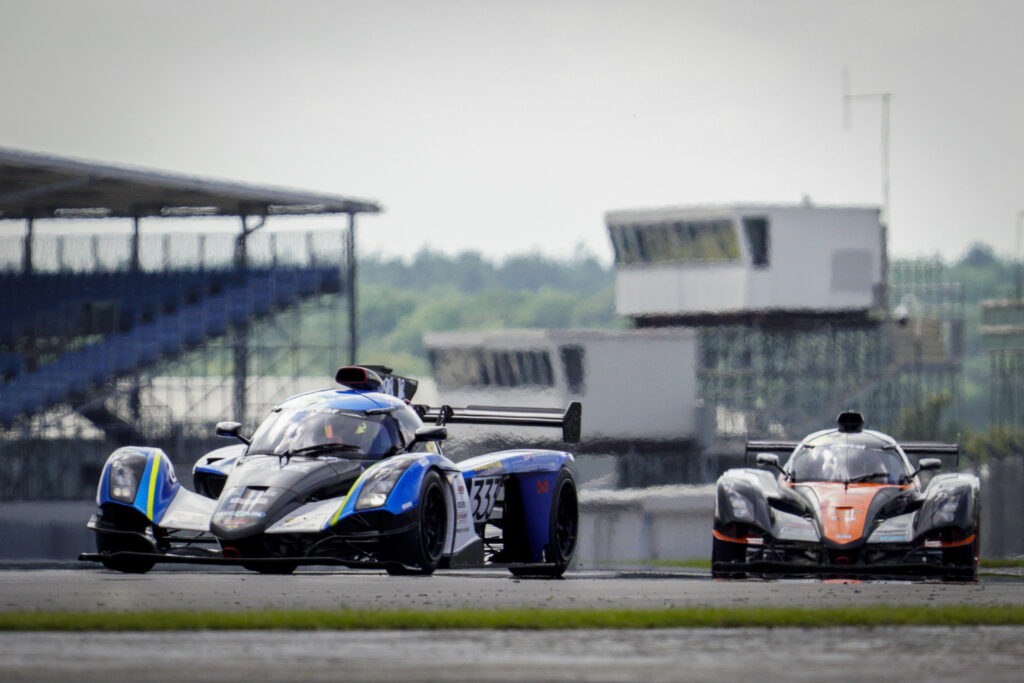 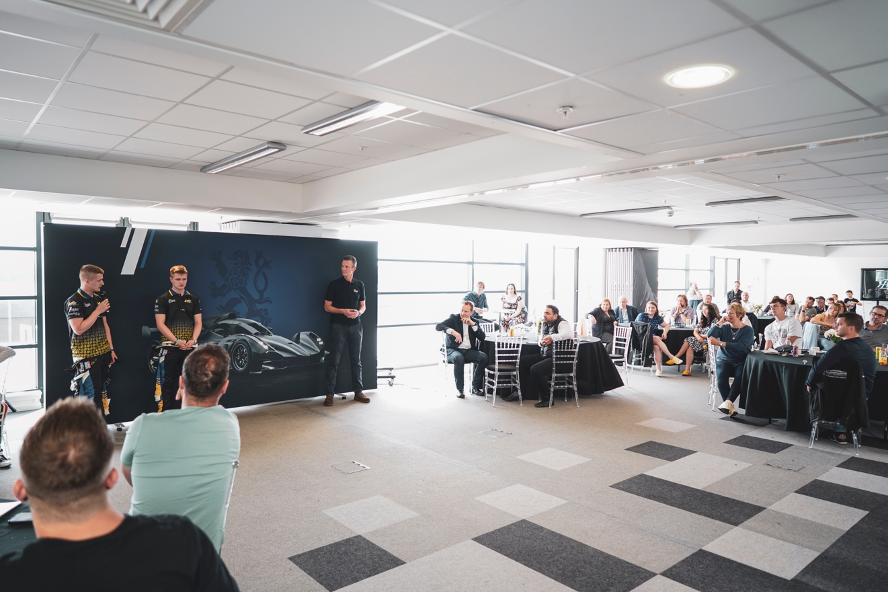 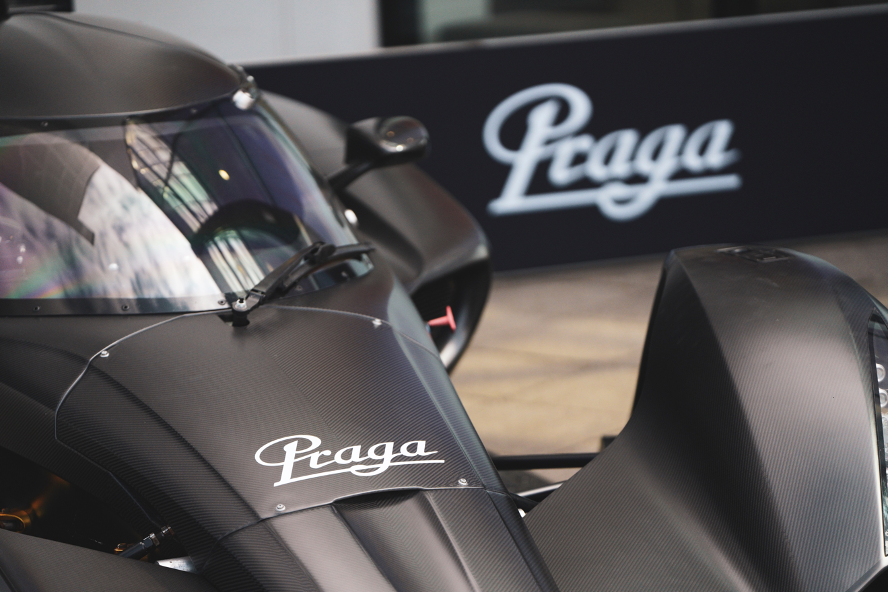 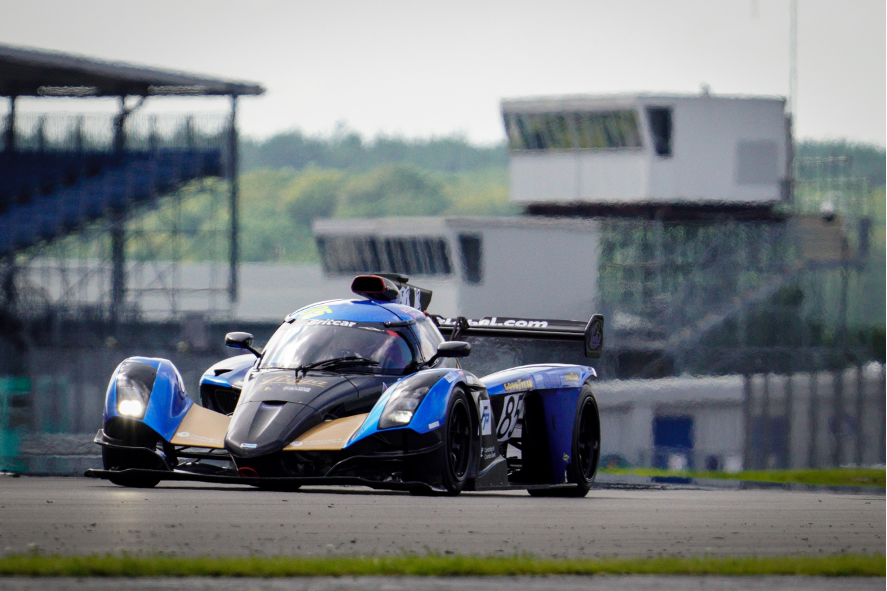 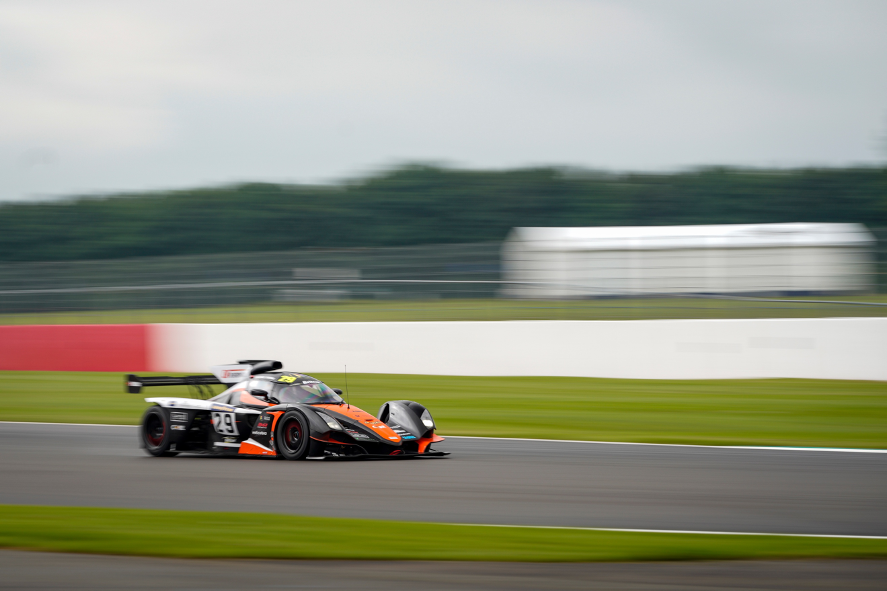 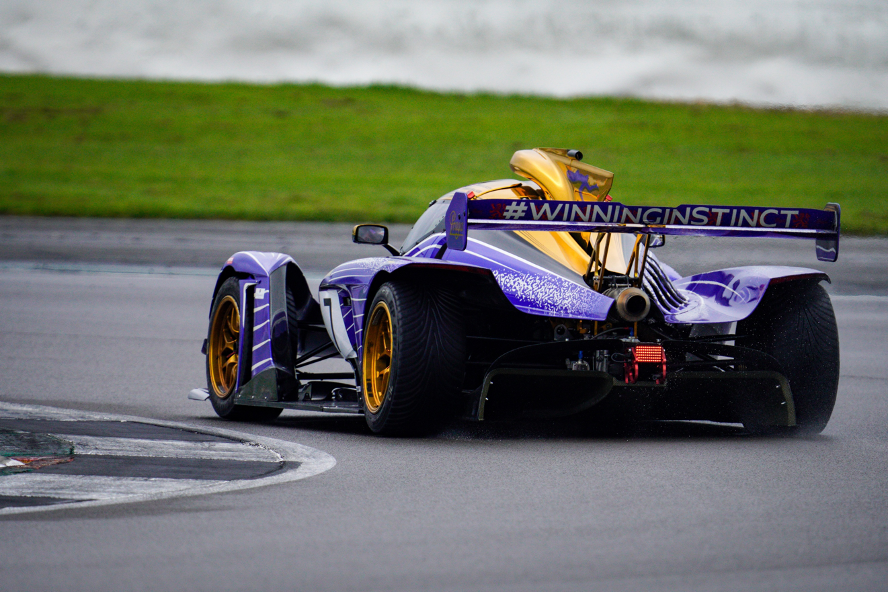 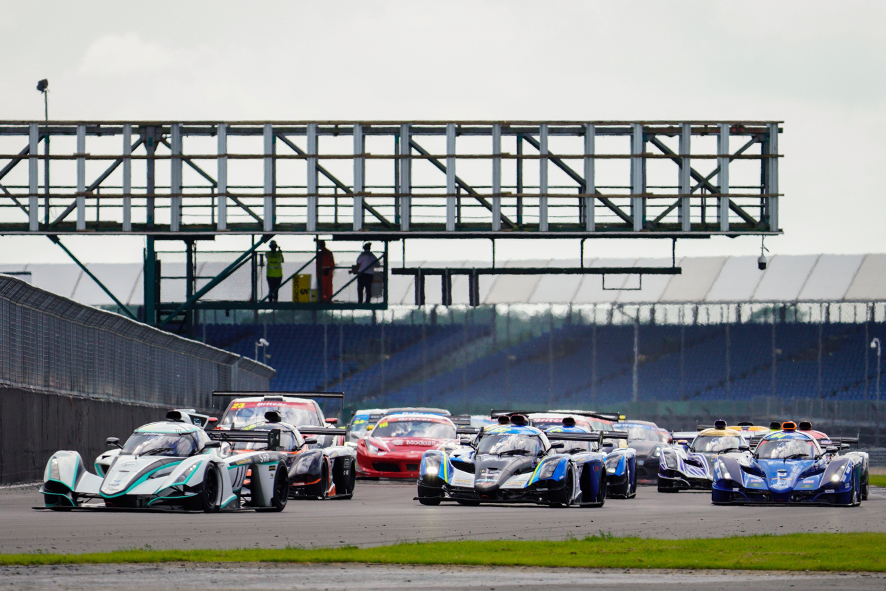 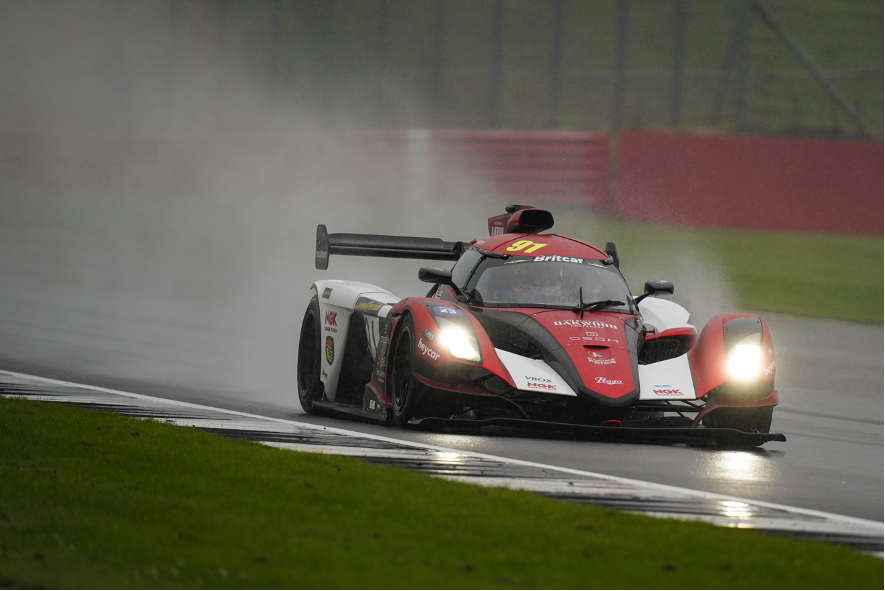